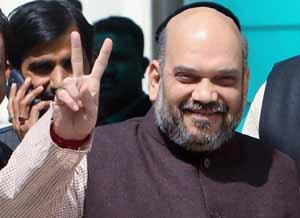 Bharatiya Janata Party president Amit Shah today  appealed to the people of Jharkhand to give clear mandate to the BJP for the formation of stable government in the state.

Addressing an election rally in Giridih ahead of the fourth phase of polling in the state scheduled on December 14, he said, “You have seen formation and fall of many governments in the state in the past 14 years. If you give majority to the BJP you will see a stable functioning government.”

He said Jharkhand has seen nine governments in 14 years of its existence and three spells of President’s Rule and warned the people that though some parties were contesting separately they would come together after elections.

Ruling JMM is contesting the on-going assembly polls alone, while Congress, RJD and JD-U are in alliance.