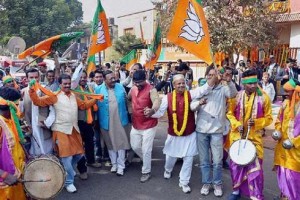 he Bharatiya Janata Party is heading towards the formation of government in Jharkhand. Votes counting trends today suggest that the party is all set to win a mandate in the JMM-ruled state.

Meanwhile celebrations began in Jharkhand as it became clear that the Bharatiya Janata Party will form the government in Jharkhand after the counting of votes began on today. Hundreds of BJP workers and supporters gathered at the party office in Ranchi and distributed sweets and burst fire crackers. Almost all the exit polls after the five-phase election had predicted a BJP win in Jharkhand. A total of 1,136 candidates fought the election.