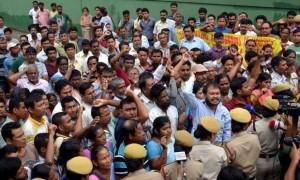 Adivasi Sengel (Empowerment) Abhiyan supporters today took out a procession in the tribal-dominated Karandih on the outskirts of Jamshedpur and burnt the effigy of Assam Chief Minister Tarun Gogoi in protest against the killing of tribals by Bodo militants in Assam.

ASA has called for bandh in Assam, Bengal, Odisha and Jharkhand against the killing of tribals by Bodo militants in Kokrajhar and Sonitpur district of Assam recently.

Adivasi president Salkhan Murmu reportedly said that a similar protest was also observed in tribal-dominated districts of Jamtara, Dumka and Bokaro, where too the effigy of Gogoi was burnt.
Murmu claimed that the bandh evoked a good response in Bengal, where ASA activists blocked road and rail traffic at several places.
Meanwhile, the district administration here has made elaborate security arrangements to maintain law and order during the bandh.