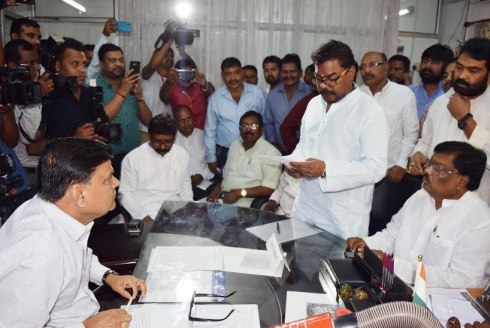 The RS polls in Jharkhand are going to witness a battle between the ruling BJP and its allies virsus the divided Opposition.

From among the Opposition,the Jharkhand Mukti Morcha has put up Basant Soren as its candidate.Soren is the youngest son of the JMM’s supremo Shibu Soren and brother of the party’s Acting President and ex Chief Minister Hemant Soren.

With 47 MLAs under the BJP and its allies’ fold in 81 member strong Jharkhand Assembly,they can only win one RS seat.But to make its second candidate to win,these parties of the NDA need to gain support of atleast nine more MLAs.

Similarly,with the JMM having 19 MLAs,it requires the support of nine more MLAs of the Congress(7) and the Jharkhand Vikas Morcha(2).

As of now,none of these two Opposition parties-Congress and the JVM had made public their stand-whether they will support the JMM candidate Basant Soren. However,Hemant had rushed to Delhi last week end and reportedly met the Congress high command.The outcome of the meeting was not known.