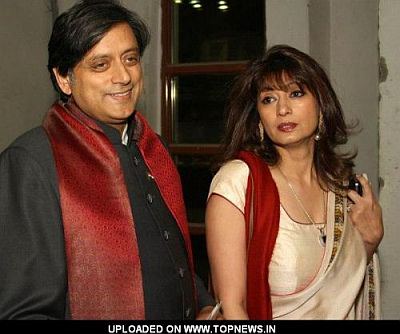 A war of words between Gujarat Chief Minister Narendra Modi and Union Minister Shashi Tharoor today reached Jharkhand where a group of students displayed play cards reading-“We love you Madam Tharoor.”For these students,Madam Tharoor is Sunanda Pushkar.”Although she is middle aged lady,she has not lost her charm.We like her”,giggled Ramesh Gope,who led a dozen students zip around in town on bikes displaying “We love you Madom Tharoor” playcards.

All of them appeared to be pro BJP and pro Modi activists in this BJP ruled state.

In fact,Modi and Tharoor had entered into a verbal duet on Pushkar,who is the third wife of Tharoor.After Tharoor re entered the cabinet of the Manmohan Singh government on Sunday,Modi reportedly said;” There was a Congress leader who was a minister. He was accused of amassing wealth from cricket. He had said in Parliament that he is not connected to the Rs 50 crore in the lady’s name”

Clearly,Modi was talking about Pushkar who is an Indian celebrity and business woman.Wikipedia informs that she was sales director in a Dubai-based real estate company Tecom.With Tharoor was her third marriage.

Her first husband was a Kashmiri. After that marriage ended in a divorce, she married a Kerala businessman Sujith Menon.Soon,Menon died in a road accident in 1997.She has a 19-year-old son, Shiv Menon,from her second marriage. In April 2010, she voluntarily relinquished a stake in the Kochi IPL team estimated at Rs 70 crore. She belongs to a family of landlords and Army officers from Bomai, 8 km from Sopore in the Kashmir Valley.

In an apparent attack on Pushkar, Modi at an election rally on Monday said, “Wah kya girlfriend hai. Apne kabhi dekha hai 50 crore ka girlfriend?” (What a girlfriend?. Have you ever seen a 50-crore girlfriend).”

Giving a road side view on the issue,Gope said:”Tharoor Bhaiya and Pushkar Bhabhi are great lovers.Even after their two marriages,they were going strong.Long live their marriage!”