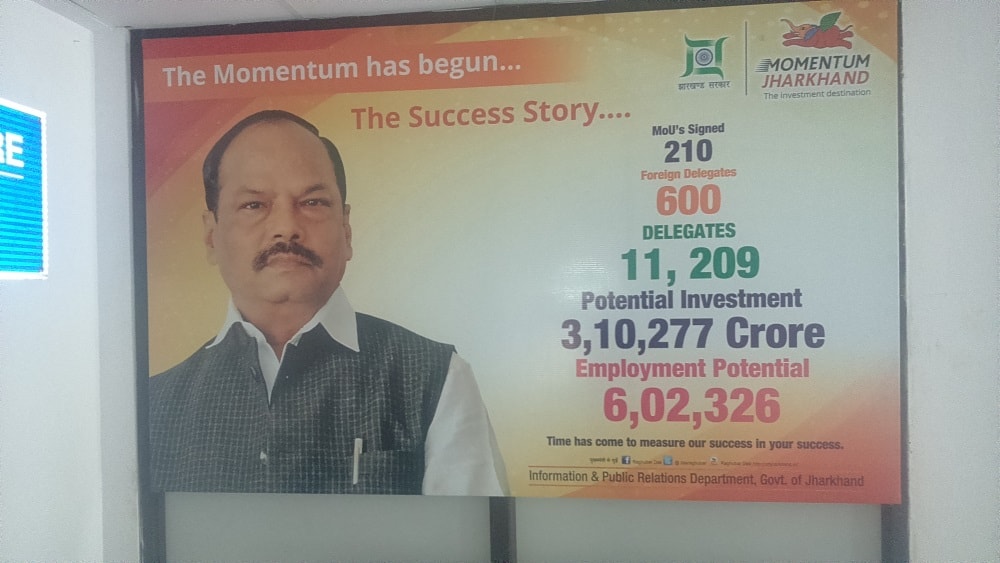 *Picture shows the poster put up by the Raghubar Das Govt in Ranchi.

Jharkhand Chief Minister Raghubar Das's plans to project the state as an attractive destination for domestic and foreign investors have remained a dream only.

'Momentum Jharkhand' project was packed with an aim-turn the state into an attractive destination for foreign and domestic investors.With this goal, the state government led by him had begun and ended the project after a series of campaigns.

This had made him and his team hold meetings,road shows and conferences across India-Mumbai,Bengaluru,Kolkata and Chennai -and abroad-Japan,USA and China-as well.

More than Rs 1150 crore was spent by the state government on 'Momentum Jharkhand' with a logo showing a 'Flying Elephant.'

As per a poster put up by the state government,201 MoUs were signed,11,209 delegates came to Ranchi,with potential investment of Rs3,10,277 Crore.

More,while it self claimed as 'a success story...'.it calculated to have 'employment potential of 6,02,326 jobs.Notably,the Momentum Jharkhand investors meet was held in Ranchi on February 16-17,2017.

Four months down the line,the flying elephant was not visible anywhere.The unemployed youths awaited jobs.No investors worth recognition have set up industries in the state,what to talk about generating employment opportunities to lakhs of unemployed youths.

Now,power cuts were a daily routine.The potholed roads,lanes and bylanes of the block and district headquarters including Ranchi,capital of Jharkhand were nightmare for tourists.

Notably,while farmers in Ranchi had committed suicide allegedly due to financial crisis,Das and his team are planning to fly to South Korea and Japan with a team of officials on July 17-22.

None of a dozen officials jharkhandstatenews.com contacted for their opinion was ready to get quoted."If the Das govt has this kind of plans,we can do nothing",quipped a senior officer who does not want to be identified.