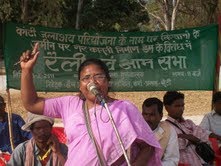 “The police is atrocitious.If it does not mend its ways,it will face the fury of people”,thunders Shiva Kachhap,president of Ranchi Mahanagar Sarna Prathna Mahasabha,a body of Adivasis.“We will not tolerate police zulm.The people are now conscious of their rights.”The mood of the Adivasis in Ranchi and it adjoining areas is truculent.And a section of the young Adivasis are also getting twitchy.

As Sandip Pandey,recipient of Magsaysay award and a leader of the National Alliance of People’s movement,put it,” Adivasis are vested with special status in the Indian Consttution. If the need be,the people from across the country will gather in Ranchi to raise voice in favour of it.”

For these leaders,the arrest of Dayamani Barla and her incarceration in jail since October 4,was a matter of serious concern.Barla,a tribal woman activist,has been in the forefront of the anti displacement movement for long.

After the Supreme Court refused to entertain a Public Interest Litigation petition filed on behalf of the tribal landowners of Nagri, which sought to halt the construction of three elite higher education institutions on 227 acres of land adjacent to their village,she led the land owners resist its acquisition and construction.

The campus, just outside city limits, is to accommodate the Indian Institute of Management, Indian Institute of Information Technology and National University for Study and Research in Law. The under-construction Ring Road cuts through the site, which lies along the Ranchi-Patratu Road to the North of the city.

Even prior to the anti land acquisition movement at Nagri,Barla had led other agitations to get booked by the police in half a dozen cases on charges varying between the breach of peace,burning of effigy and so on.After she surrendered in a case related with burning of an effigy,she was taken in judicial custody.

Later,she got the bail.But she could not come out of jail as she faced other cases in which she had not got the bail.On Monday,the court heard her petition seeking bail in a case and reserved the verdict.The court is slated to take up her case on November 8.

Now,when the construction of these campuses was going on under the cover of security,the tribal outfits were busy mobilizing people to hold a “Jani Shikar” rally in Ranchi to protest against her arrest on the same day.”In this rally women wearing the dress of men will assemble at Morahabadi Maidan”,said Kachhap.

Notably,though none of the mainstream political parties had come out in her support,Pandey,who came to Ranchi and addressed a gathering of pro Barla actvists on Monday,has voiced his support in her favour.”Like the way protests were organized in favour of Vinayak Sen,we will make efforts to organize similar protests”,said Pandey.