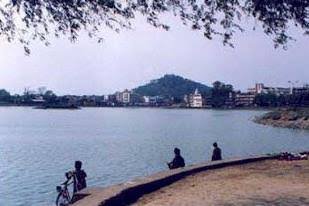 *Representational Picture shows Bada Talab covered by the beautification project of the BJP government project without getting water cleaned and keep it clean.

Monsoon may be late however crores of rupees worth projects are raining in Jharkhand.

In all,there were four projects.

As per the plan,these four projects are to be made ready withing 24 months.Strangely enough though two water bodies are covered under these four projects,none carries any scheme to clean its water and maintain its cleanliness.

Many leaders of the ruling BJP have welcomed these projects.However,eye brows were raised over rising number of buildings and cemented pathways,each is bound to increase the size of concrete jungle in Ranchi,Ramgarh and Khunti.

Critics say that since 'commission' in percentage varying between 20-40 percent of the project outlay, was earned quick and fast,no effort was made on maintenance.Which is why perhaps,no plan was made to clean and maintain eco- friendly ponds  covered by these projects.