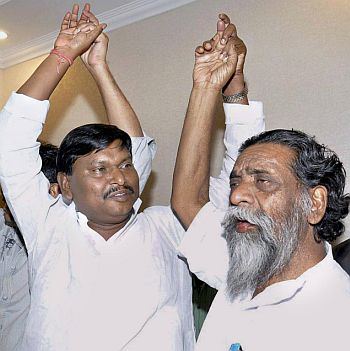 What will happen when the coalition government led by chief minister Arjun Munda will complete 28 months in power on September 11,2013?If its interpretation by former chief minister and Jharkhand Mukti Morcha president Shibu Soren in course of his press conference in Bokaro on Wednesday, is any indication,”the term of the BJP will end and the JMM will come to power.”

Sitting in his farm house in Bokaro,the aging former CM has been using all his power of lungs,punctuated with disjointed statements,to warn the ally BJP of the dire consequence if it did not agree to offer the CM’s post to JMM after Munda completes 28 months in office.“Otherwise,we will pull down his government”,says Soern.

Within his 18 MLA strong party,hundreds of workers led by its atleast four MLAs-:Simon Marandi,Polus Surin,Sita Soren and Aqeel Akhtar-have been opposed to two things.One,they were not ready to accept Hemant as their leader.Two,in view of the well known antipathy of the minorities toward the saffron party,they were always opposed to Soren’s stand to back the BJP led government.

Although the Assembly polls were slated to be held in 2014,Soren’s threat appeared to be aimed at mollifying them.Which is why perhaps he has toughened his posture against the BJP.”By threatening,he had not lost anything.In fact,it was always a win-win scene for him”,says Assistant Professor of Ranchi University Ashok Singh.

The BJP’s state unit president Dineshanand Goswami had denied that any such agreement was made between the two parties.Even Soren’s son Hemnant,who is Deputy CM,had feigned ignorance about it.”Such an agreement was not formalised in my presence”,says Hemant.

Although the truth is not known,the opposition Congress whose mutually hostile leaders were reportedly in touch with Soren to cobble up an alliance to form the government with the help of some Independents,,had greeted Soren’s threat.”Shibu Soren was with the Congress since the time of Indira Gandhi… We will not let the President’s rule be imposed again”,said Congress leader and leader of the opposition RP Singh.

Irrespective of whether or not the highly unpredictable JMM chief will pave the way for the present government to fall in the new year,Soren has again raised a stink over political instability in the state at a time when Munda was trying to take Jharkhand forward on way to development.