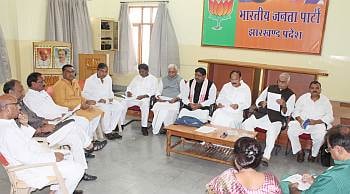 Jharkhand state developing or not is a question with answers figuring in both positive and negative explanations.But the fact that the ruling BJP is gaining assets can not be disputed.

So because the party leaders have laid foundation stone for construction of permanent district headquarter offices,each with modern amenities in 11 of total 26 districts in the state including Simdega,Khunti,Chaibasa and Dhanbad.

As per the state BJP's plan,these party offices are to be made functional before 2019 Parliamentary elections.Each office will be constructed on at least 2,500 square feet carpet area and would be a G+1 building.This was confirmed by the party's media in-charge Shivpujan Pathak.

More,says Pathak,the party has handed over building construction work of these district offices to infrastructure ,major Larsen & Toubro, a major Indian multinational engaged in technology, engineering, construction, manufacturing and financial services, with global operations. Its products and systems are marketed in over 30 countries worldwide.

The scope involves the design and construction of a 172 MLD (million litres per day) intake well with a pump house,a 114 MLD water treatment plant and a 217 km of rising main and distribution pipelines including associated electro-mechanical works.