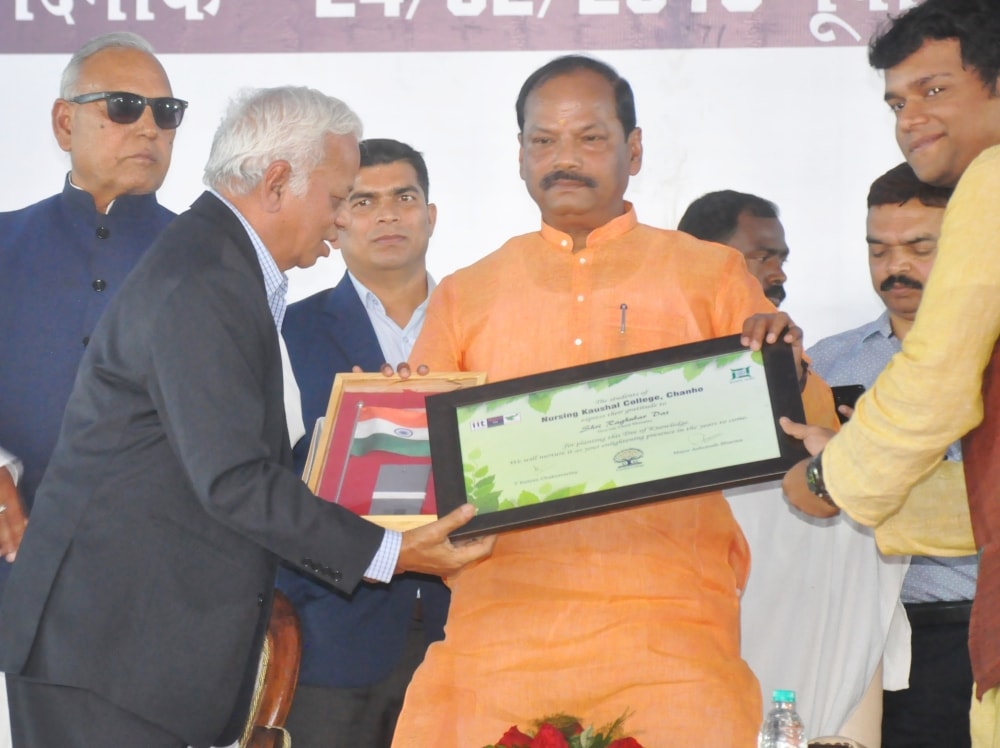 Chief Minister Shri Raghubar Das said that the youth of the state should fulfill their dreams with positive thinking. The government is always with them. In the year 2018, one lakh unskilled, unemployed youth will be trained in skill development and linked to employment. Soon, a Nursing Skills College will be set up in Gumla, Jamtara, Itki, Chaibasa and Sahebganj. Training centers related to manufacturing, catering and housekeeping will be set up in Barkakana in Ramgarh district. 18000 children of the state who have lost their parents will be provided skill training and employment. The Chief Minister said this while addressing the inauguration ceremony of the newly constructed Nursing Skills College, Chanho, Ranchi, administered by SPV Prejha Foundation by the Welfare Department of Jharkhand Government.

Chief Minister Shri Raghubar Das said that this nursing skill college is the first Hitech College of the state. The establishment of this college with 120 seats will give full benefit to the students of the Health Sector. This college has been constructed by the State Government under the prescribed time limit, which is commendable. The Chief Minister said that there is a lot of employment potential in the health sector. After completion of 10+2, students should be trained. In other sectors other than health sector, the government is also making a concerted effort to create jobs. The new Jharkhand is to be built by the year 2022. The dream of the Honorable Prime Minister ‘ Har hath ko hunar, har hath ko kaam’ will be done by the state government.

While praising Muthathuraman, President of the Prejha Foundation, the Chief Minister said that the Prejha Foundation is doing a good job for the youth of the state. Shri Muthathuraman is playing a key role in the development of the state. If such experienced people join the government then the day is not far when Jharkhand will be at the top of the developed state category.

Chief Minister Raghubar Das said that youth should not afraid of struggle but reiterate your skills with honesty and firmness and join employment. Several types of training programs related to skill development are being run by the State Government. You will be trained in the same area where you are interested. Youth should join the schemes government. Youth power is the power of the nation.
Addressing the program, Minister of Tribal Affairs, Government of India, Lohardaga, Shri Sudarshan Bhagat said that the state is progressing rapidly under the leadership of Chief Minister Raghubar Das. Newly built Nursing Skills College in Chanho is a matter of pride for the state. The Center and the State Government have carried out several important initiatives in the field of skill development from the beginning. The government is working for the unemployed youth. Youth are being trained through Gurukul in all the districts of the state. There will be a major revolution in the health sector due to the introduction of newly built Nursing Skills College located in Chanho. In the coming time, advanced ANMs, nurses and health workers will come out and join employment. This college will prove to be worthwhile towards poverty alleviation. The state government is truly realizing the dream of the Prime Minister.

While addressing the program, Welfare Minister Louis Marandi said that today's day is historic for the state. This nursing skill for employment in the health sector will prove to be the milestone. With the launch of this college, new energy has been transmitted to the girls of the region. It is also necessary to be skilled with learning in today's time. This work has been possible with the efforts of the Welfare Department and the concerned officers under the leadership of the Chief Minister. The Prejha Foundation is also eligible for congratulations. We all have full faith that the Prejha Foundation will carry out the successful operation of this college. The state government is in the process of setting up a nursing skill college in all the division of the state. Gurukul Training Center has been established by the Welfare Department in 18 districts of the state. Other districts will also have establishment soon.
Chief Minister Raghubar Das inaugurated the program by lighting the lamp. A book was also released on the success of Kalyan Gurukul.