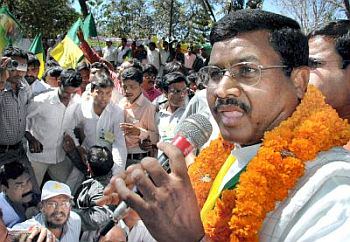 Cracks have developed within the Congress party in Jharkhand following the dharna launched by its ally turned foe Jharkhand Vikas Morcha led by Babulal Marandi against the private coal company-Panem in Pakur district in Santhal Pargana.Panem,involved in mining and dispatch of coal from Pachuwara in Pakur to Punjab State Electricity Board,had promised to undertake rehabilitation of those people who were displaced by it in accordance with an agreement reached between its management and the people led by Sister Valsa John.

Valsa was shot dead by some of her own group’s men backed by the Maoists last year.A year after her murder,Marandi alleged that the company had not enforced the ‘agreement’in letter and spirit and demanding its implementation had launched dharna and economic blockade.He was joined by two prominent Congress leaders –Stephen Marandi and Furkan Ansari,who hailed from Santhal Pargana.

Since the JVM was no longer an ally and the Congress party had not taken any decision to join its agitation,latter’s state unit president Pradeep Balmuchu,who is alleged to have struck a ‘deal’ with Panem,threatened to take disciplinary action against Stephen and Furkan.

“Taking part in agitation being carried under JVM is a serious issue.Our party is with the displaced.Instead of fighting for them under the JVM,they should have waged the agitation under the banner of the Congress”,said Balmuchu.

Reacting to Balmuchu’s move,Furkan said:”Balmuchu must remain within his limits.I am a senior leader and I know what is good or bad for the party.By participating in the agitation,the support of the Congress had increased”,said Furkan echoing the sentiments of Stephen.

Stephen said:”I have done nothing wrong.I am working in view of the people’s sentiments.Whether the party backs it or takes action,it does not matter to me.”