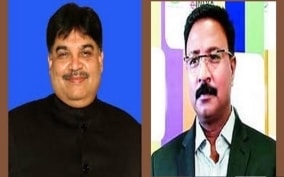 Jharkhand is set to undergo a major bureaucratic change with two top functionaries of the government set to retire soon.

First to retire on September 30 is Chief Secretary Sudhir Tripathi,1985 batch IAS officer. The question is: who will succeed him?

There are four IAS officers, each holding the post of Additional Chief Secretary. They are: DK Tiwari,1986 batch, who holds the post of Development Commissioner; NN Sinha,1987 batch, who is on central deputation in New Delhi; Sukhdeo Singh,1987 batch who is in-charge of finance department; and  Arun Kumar Singh,1988 batch.

Among them the names of DK Tiwari and Sukhdeo Singh, who is learned to be an upright and honest-a factor considered 'negative' in the ruling political circle-are doing the rounds in corridors of power.

Incase, Tripathi is not given an extension, which is also a possibility, Sukhdeo can lag behind Tiwari in the so-called  'race' for the top post.

Another functionary to retire on November 30 is K.Vidyasagar.A rumor doing the round is ex-Chief Secretary Rajbala Sinha and outgoing CS Tripathi may succeed Vidyasagar.