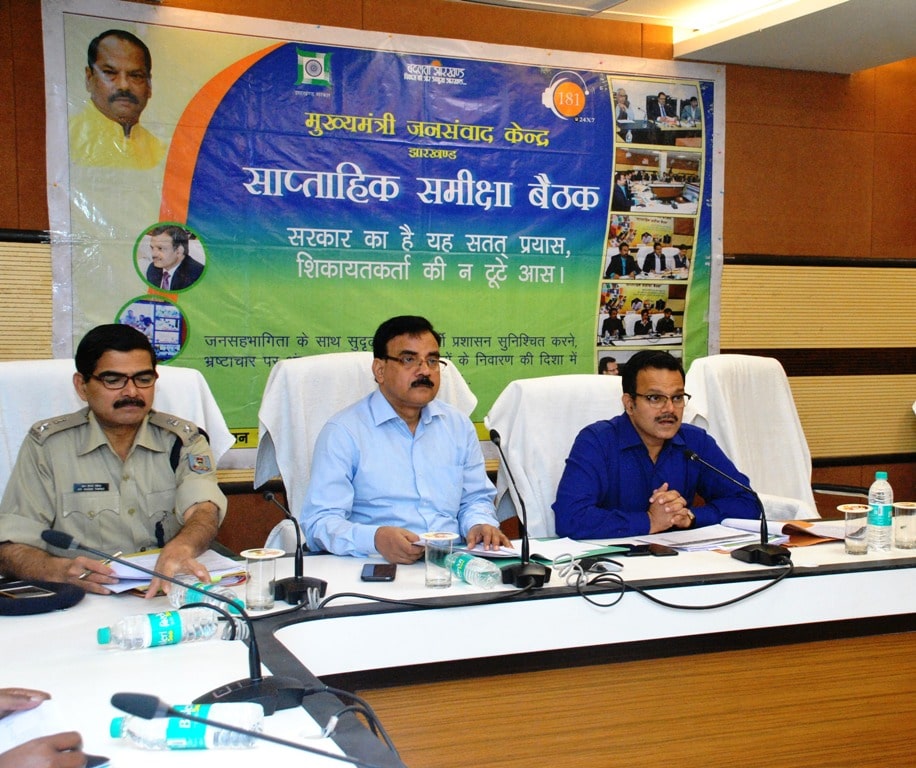 On the disappointing performance of Dhanbad, Palamu and Giridih, Principal Secretary to Chief Minister Shri Sunil Kumar Barnwal expressed dissatisfaction. He instructed the Deputy Commissioners of all three districts to give an answer for poor performance within a week. At the state level, even more than one thousand grievances were pending in the Department of Energy; Shri Barnwal reprimanded the departmental officers. He said that in the districts and departments where the highest numbers of complaints are pending, action will be taken after identifying the responsible officials. The Secretary was reviewing complaints in weekly review program of Jansamvad Kendra.

Devyangta pension of Ishaq Alam, Deoghar has not been paid from May 2017, Additional Secretary Ramakant Singh asked for explanation from departmental officer while principal secretary to Chief Minister instructed execute the matter within a week or action will be taken against the guilty officer.

Construction of Panchayat Bhawan of Alkusha Village, Bokaro is pending since 2010. The Nodal Officer of the Rural Development Department said that it will be completed in a week. On this, Shri Barnwal ordered the department officials to upload the photo of the work done so far by geo tagging on the photo portal.

Ashok Prasad Raut of Deoghar, got approval of housing under the Prime Minister housing scheme- Urban, in September 2017 but he has not been paid the sum. On this the Nodal officer said that initial work of construction has not been started so far due to which he has not been paid. On the Principle Secretary instructed to execute the matter within 1 week.

On the complaint of not paying daily wages to 24 employees working in Latehar Power Sub-Station, Additional Secretary of the CM directed the departmental Nodal Officer to ensure payment of all the workers in one week.

Senior Technical Assistant in Tourism, Art Culture, Sports and Youth Affairs, Kumar Anand died in an accident in June 2014 during service in Ranchi. After his death, his dependent son Saurabh Anand has not got a job on the basis of compassion. The Principal Secretary of the Government ordered the department to issue appointment letters within one week.

On another complain, Shiv Kumar Das did not get job on compassion after death of his father Jitan Ram, who was working as fourth grade employee in State Food Corporation, Hazaribagh and died during service in 2003. The Nodal officer expressed his inability to give job due to lack of vacancy in the department. On this the principle secretary instructed to give appointment in another department and execute the matter till next Tuesday.

Land of Mathura Prasad of Simdega was acquired for construction of road by the land acquisition office, Simadega in 2016. However, the compensation amount has not been paid so far. The Principle Secretary directed the department to make a payment in one week.
Water supply from the water tank is closed in ward number-3, Sundru Village, Lohardaga due to faulty solar since February 2016. The department official said that for the repair of solar, approval has been taken from DC for Untied Fund. It will be repaired in 3 weeks. On this the principle secretary directed to complete the work in due time.

Deepa Kumari, 19, of Balia village, Giridih was killed on November 5, 2014. In this case an FIR was lodged in the Birni police station, but the accused have not been arrested so far. The matter was taken up in the Seedhi Baat program and in weekly review, but till now the Police Department has not reached to any conclusions. On this the principle secretary ordered AIG-to-DGP to send letter to DIG to execute the matter.