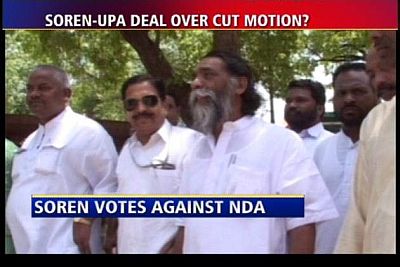 Signalling a possible realignment of forces in Jharkhand,almost two years ahead of Assembly elections in 2014,Jharkhand Mukti Morha,one of the principal constituents of the ruling coalition headed by BJP leader and Chief Minister Arjun Munda,had voted in favour of the UPA’s motion on FDI in retail on floor of the Lok Sabha.

Now,while JMM leader and Deputy CM Hemant Soren had convened a press conferance to make public his party’s stand that it had ‘alternative’and that the ‘BJP should think of its own’,BJP’s state unit incharge Harendra Pratap Singh has reacted saying that ‘if the ties between his party and the JMM breaks down,the BJP will cobble up a new coalition.’

‘To liberate Jharkhand from the President’s rule,the BJP had formed a coalition with the JMM.The BJP does not have lust for power as is the case with the JMM’,said Singh yesterday.

Within the JMM,there were atleast five of total 18 MLAs including Simon Marandi,Polus Surin and Sita Soren who have been opposed to the party’s stand to form the government with the BJP.Moreover,if Sita is allegedly involved in the cash for vote scam related with the Rajya Sabha by poll held early this year,Marandi was involved in scandal aired by CNN-IBN on August 2, 2010.

The scandal indicated that Congress’s Dheeraj Sahu who had won the RS polls by reportedly bribing Congress’s Rajiv Ranjan, BJP’s Uma Shankar Akela and JMM’s Simon Marandi and Tek Lal Mahato. As per EC orders, FIRs were lodged against them by the state Vigilance Bureau. Mahato is dead.

Both Sita and Marandi who wanted to wriggle out of the scams,were reportedly in favour of the alliance with the Congress on the ground that it can save them by goading the CBI to go slow in its investigations against them.Result?

The JMM chief Shibu Soren was in Delhi.The Congress leader and leader of the opposition RP Singh and two Independent MLAs Bandhu Tirkey and Chamra Linda rushed to Delhi yesterday.Insiders say,the move was on to make the JMM withdraw support to the Munda government to form a new coalition government headed by JMM and backed by the Congress and the Independents.

Aware of it Singh said:”In case,the JMM chose its own course,the BJP will not waste a minute and reach the Governor.”