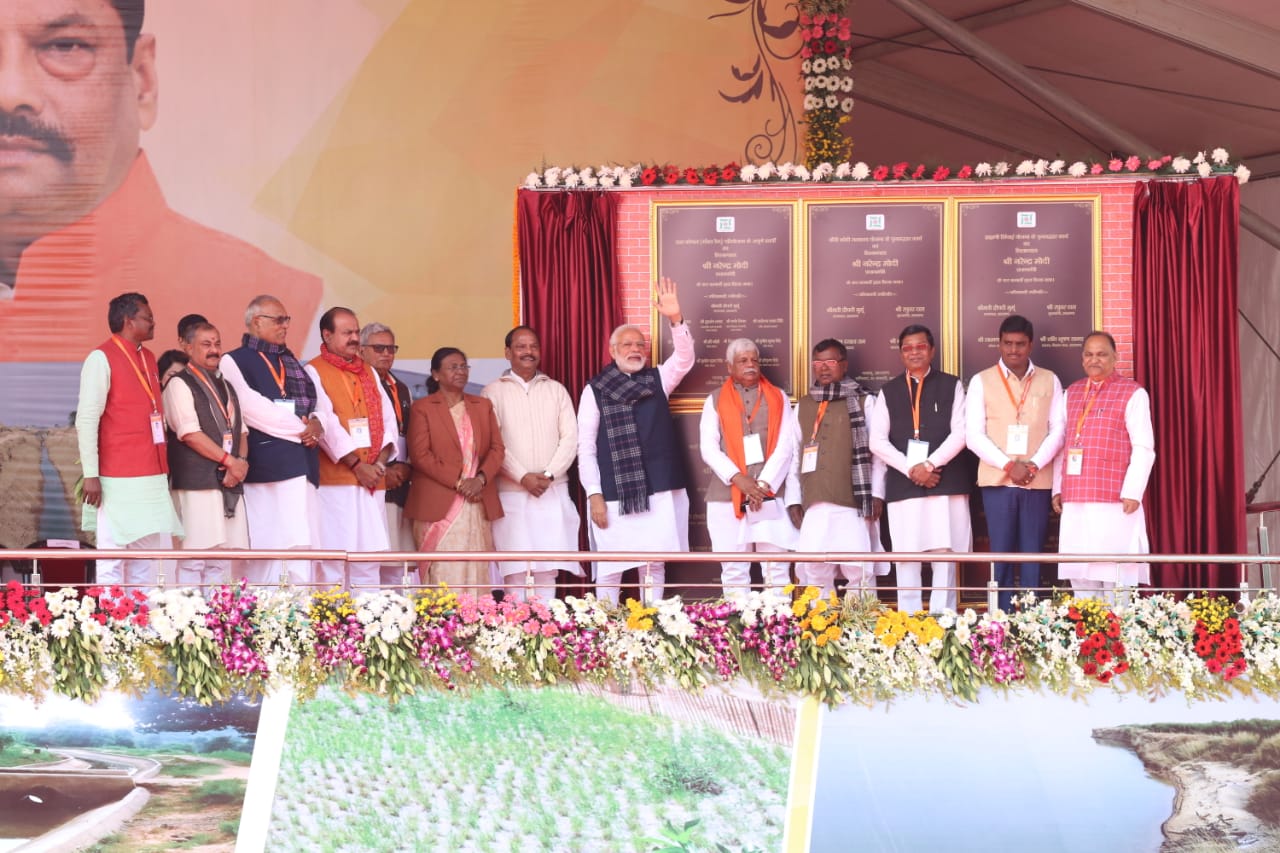 Prime Minister Narendra Modi laid the foundation stone for the Northern Coel (Mandal Dam) at the Chianki airport in Medininagar, Palamu. The Prime Minister congratulated Jharkhand and Bihar Government, Chatra MP, Palamu MP, Aurangabad MP for the efforts that resulted in laying the foundation for six irrigation and drinking water supply schemes including Mandal Dam. The prime minister bowed down to the land of heroic sons, land of Nilambar-Pitambar and to people who came to bless him.

The Prime Minister said that 99 schemes for the prosperity of farmers were stuck for 40 years which is being completed by the present government at the cost of 90 thousand crores. This is our methodology. Work is being done from seeds to market for the empowerment of farmers.

The prime minister said that during the 5 years before 2014, the former government constructed 25 lakh houses for the poor, but after 2014, this government has constructed 1 crore 25 lakh. It is the promise of the present government that by 2022 all the poor will be provided a quality assured house. We stopped the process of giving accommodation in the name of a family. Now if any government comes, it will be known as the Prime Minister's Housing Scheme. There is no place for brokers and intermediaries in this government. While honouring the women of the country, work is being done to complete the construction of the house within 12 months for them. The goal of the government is to provide housing to all the poor, according to the 2011 census. Females are becoming the owner of the house because the house is being allotted to them through the Gram Sabha.

Speaking on the occasion, Chief Minister Raghubar Das said that Prime Minister Narendra Modi blessed Palamu by resuming the Mandal Dam scheme pending for 47 years. This scheme will benefit the farmers of Jharkhand and Bihar. Jharkhand's 19, 604 hectares of land will be irrigated. With the efforts of the Prime Minister Palamu will get rid of the problem of migration.

The Chief Minister informed that before the year 2014, 91 thousand hectares of the state's land was irrigated. But in the last 4 years this figure has reached 2 lakh 10 thousand hectares. The government is working on making Jai Jawan Jai Kisan meaningful. The government of the double engine is working in every field. From April 2019, electricity will be supplied to the farmers for irrigation from a separate feeder.

In his welcome address, Chatra MP Sunil Kumar Singh welcomed the Prime Minister on the land of Nilambar Pitambar. With your effort Palamu's 45-year-old dream is taking shape. Palamu has been moving towards relief from draught.
Palamu MP Vishnu Dayal Ram gave the concluding speech.