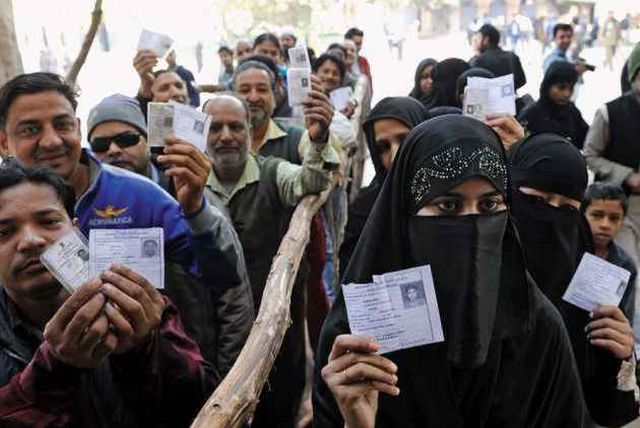 He lives in France. Iqbal Latif, a Pakistani, who claims to have studied the social background of Muslims in UP, has his own reasons to believe that the defeat of BSP- SP and victory of BJP led by Narendra Modi was due mainly to Muslim women. They voted for the ruling BJP.

Latif writes: 'Polygamy and triple talaq' were tipping points for the Muslim women in UP who were fed up of being treated as the doormat, they delivered this landslide to BJP.

He thinks Muslim Women in UP have helped brought this landslide for BJP, there are 134 seats heavily influenced by the Muslim vote, these were usually Mayawati seats or BSP, out of these 134 seats 104 have gone to BJP. This is the slight 3-4% tilt I have been highlighting for the last 24 hours.

Muslim women in UP had a better understanding and approached the issue of scripturally endorsed inequality in a pragmatic manner. They, unlike their husbands, refused to become a tool in the hands of self-styled liberals of the left who have no interest in them being treated like doormats by their menfolk.

They voted tactically for their interests and for their freedom from the sword of Damocles of triple talaq and polygamy hanging over their head. This is a revolution in making.

Emancipation of women will ensure inclusive education training creativity innovation in the future generations of UP Muslims. They as future educated mothers will ensure better opportunities for their children once freed from the oppression of three-second dissociation at will.

This elan vital should be heard loud and clear across the border, everyone needs to stop this continued suppression of women by endorsing higher doses of Shariah laws like in Pakistan. This message of UP women will resonate across the sub-continent as voices bent on ensuring emancipation and their basic rights to be respected.

This sums it all 'Lohar kee eek sooner kee soo' 'For each Abdul voting against Modi, 4 women from his family voted for Modi, due to his stand against triple talaq and polygamy. Mr Modi has created a huge fan base among 11 crore Muslim women.' 45m Muslims of UP if they care about themselves should align themselves with mainstream instead of hyper slogans of Mayawati that serves no purpose. It is the job of the huge 20% minority of UP not to be a tool in the hands of the likes of Mayawati!

On a broader level why can't Muslim change their heart in India and build bridges than to be a part of movements that are not economically helpful to them. Why be part of the losing side.

Why not join mainstream politics that is very dominant and prevalent. It is not going to change much as the liberal left is adamant to oppose BJP so is the rising fortunes of the BJP. If after demonetization they can bring such results than Muslims should not expect any miracles from SP kind of parties. Rather they should join the mainstream to be a partner in development and progress instead of being at the bottom or at best on the fringe.”