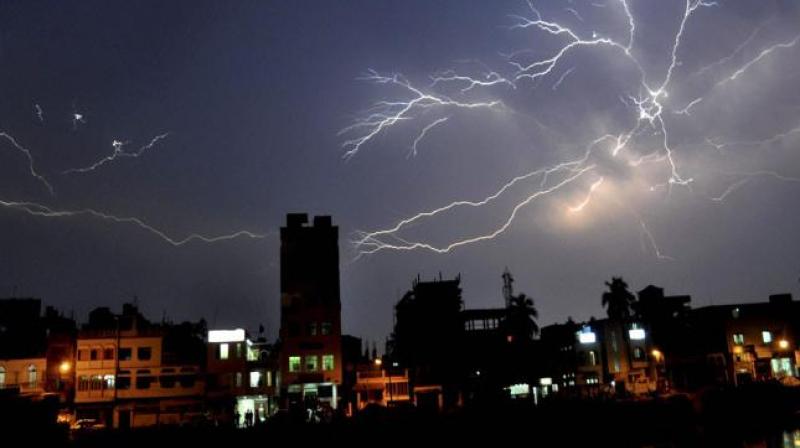 Nobody knows why there have been clouds and lightening with drizzle and mild rains off and on during the month of Shravan(June-July). Sad during this month, many people have been killed in many parts of Bihar and Jharkhand where the earth received minimal rains in comparison to average in previous years since 2010.

Against this backdrop, a move is on to use technology to locate lightning sites and communicate with people to prevent casualty. The move was in the initial phase started by the state disaster department in Jharkhand. However, if the public fund is spent without testing usefulness of the technology and the scheme, it can result in 'lightning scam.'

Records show that at least  51 people were killed and nine others injured in lightning strikes in Bihar and Jharkhand on Tuesday- Wednesday-Thursday-Friday.In Bihar, as many as  39 people had died across a dozen districts, while 12 others lost their lives in four districts of Jharkhand.

In Bihar, Jamui accounted for the highest number of eight deaths followed by Aurangabad (seven), Bhagalpur, Banka and East Champaran (four each), Rohtas (three), Nawada, Nalanda and Katihar (two each) and Munger, Arwal and Gaya (one each), the state disaster management department said.

Three persons have suffered injuries on being struck by lightning in Bhagalpur, while the number of wounded was one each in Banka and Jamui districts, the department added.

Ex-gratia will be paid to the next of the kin of each deceased, in keeping with the state government's policy, while proper treatment will be ensured for the injured, official sources said.

In Jharkhand, six persons died in Jamtara district while two each were killed in Ramgarh, Pakur and Dumka districts, the police said adding that four others were injured.

Five persons of Jamtara were killed and one person was injured. All of them were returning after taking a bath at a nearby pond when it started raining. They stood under a road bridge when lightning struck them.

In view of these natural disaster incidents, the Jharkhand government’s disaster department is exploring ways to use technology to trace the possible lighting site and alert people on mobile to prevent casualty. It is a positive move. However, if the technology is not checked, used and maintained properly, it can end up the misuse of public fund resulting in lighting scam, thinks a neutral observer.