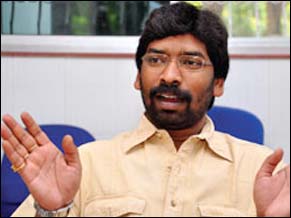 As the year -2012 -comes to end and new year- 2013- begins,Jharkhand is at the cross roads.Jharkhand was created in 2000.During the past 12 years,it has seen eight chief ministers and governors each.At the moment 12th chief secretaries is at the helm of affiars.It has experienced two stints of the President’s rule.In the past 12 years,it has seen the Madhu Koda’s regime.

Whether 2013 will see a new government or a new political formation will come into being to determine its fate?

No body know the future.But the backdrop of the tussle between two parties of the ruling coalition -BJP and the JMM-is known to every body.

First is the dispute over sharing of power in the ratio of 28:28 months.While JMM sticks to its gun that it was part of an agreement between it and the BJP 28 months ago when Munda took oath on January 11,2010,the truth is there was no such agreement between the two parties.The BJP led by chief minister Arjun Munda never agreed to it.

Now,if the JMM wants this to be enforced,the Munda government is bound to fall because it was not the basis of fact.Second,the JMM is a regional party with its own strength and weaknesses.While its strength lies in its 18 MLAs who mainly represent the poor Dalit and Adivasis,its weakness is that an overwhelming number of MLAs are not ready to accept JMM’ supremo Shibu Soren’s son Hemant,Deputy CM,as their leader.

To wriggle out of his party’s problem and get accepted as its leader,Hemant has taken a middle path.The local policy for recruitment,enforcement of Chotanagpur Tenancy Act,Santhal Pargana Tenancy Act and grant of aid to Madarsa, are demands popular among the Adivasis and Muslims.The aim behind projecting these demands was to tell the people that these demands were dear to Hemant.

To deal with these problems,there were already appropriate bodies.If these bodies were unable to solve them,the responsibility lies with both the BJP and the JMM.In fact,the agenda of Hemant was not to resolve them.Instead,the aim was to make it an agenda of the party for the forthcoming polls in 2014.

Against this backdrop,when Munda met Soren to end the political uncertainty in Jharkhand today,the chief minister knew,he could do little to win the JMM.And as such,he came to meet Soren to give a message that he did not have any ego hassle and that he was ready to meet the genuine concerns of the coalition partner,if there is any.

In response,the JMM, aware of a sharp division within its rank and file over extending support to the BJP led government,has again followed a middle path by welcoming Munda –Soren meet.But Hemant led JMM has kept the suspense alive by announcing that it sticks to its decision to take a final call on the projected issue on January 10.

In case,the JMM decides to pull down the BJP led government,Hemant,backed by Congress and its allies including RJD and Independents, may form the government.But Hemant is sure to become a villain in Jharkhand and Munda may gain the sympathy of the people.