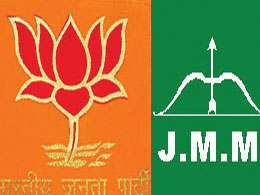 Who is behind the tussle of power between the BJP and the JMM?Are they JMM leaders-Rajya Sabha MP Sanjiv Kumar and Guruji’s ex press Advisor Himanshu Shekhar Choudhary?

If sources are to be believed,both of them were reportedly in touch with the Congress senior leaders.Together with these Congress leaders,they had reportedly prepared a master plan.

Every body knows that JMM supremo Shibu Soren is not free from accusation of his involvement in the coal allotment case.In addition,its two MLAs Simon Marandi and Sita Soren were allegedly involved in the cash for vote scam related with the Rajya Sabha by polls.They expect the ruling Congress to shield them from the CBI.

Reports say that a well thought out plan was chalked out.As per the plan,the Congress and the JMM will contest the forthcoming Lok Sabha polls as allies and severe its ties with the BJP in the New year.Toward,the same end,the JMM leadership called a meeting of MLAs and got a set of demands ready.In this charter of demands,the 28-28 month power sharing was added.

When CM Munda contradicted it and said that the BJP-JMM had never enetered into any deal with the JMM to share power for 28 month each,a CD showing the statements of leaders of the two parties made in the past,was leaked.It was telecast by some local TV channels.

The report in local Hindi daily- Prabhat Khabar-indicates that the plan to topple the 28 month old Munda government was hatched in New Delhi.As per the plan,if Munda does not quit under its threat,JMM will hold a meeting of its MLAs and MPs and make public its decision to withdraw the support.

In the aftermath of the fall of the Munda government,JMM led by Soren’s son Hemant and backed by the Congress,RJD and Independents is likely to form the government.Kumar may get a berth in the Union government.