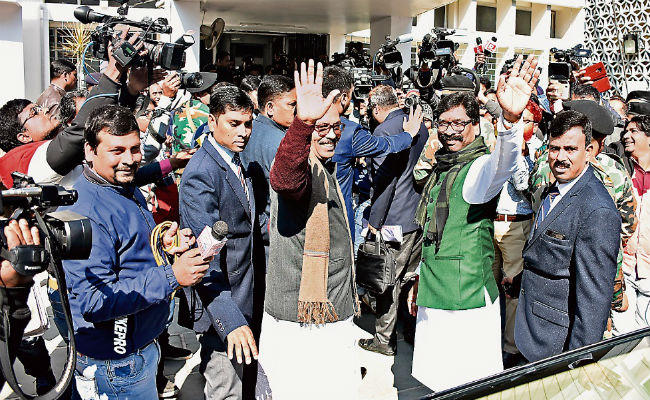 Three incidents were noticeable on the second day of the three-day session of the Jharkhand Assembly on Tuesday.

Though she did not mention which development schemes of the previous BJP government were 'good' schemes in the eyes of Hemant Soren government, Governor Murmu read out the text of her official speech stating that the Soren government will try to reach every home to serve the people.

Two, Soren presented Rs 4,210 supplementary budget for the current financial year 2019-2020 on the floor of the house. It is set to be cleared by the house on the concluding day of the session on Wednesday.

Three, JMM MLA Rabindra Mahto became 8th Speaker of the Jharkhand Assembly. The first Speaker was Inder Singh Namdhari. Mahto is the second JMM MLA who has been nominated as Speaker. The JMM's first MLA was Shashank Bhogta who had become Speaker.

In the recently held Assembly polls 2019, the coalition comprising JMM, Congress and RJD had won 29,16 and 1 = 47 seats in 81-member House respectively. Jharkhand Vikas Morcha led by ex-CM Babulal Marandi had supported Mahto as Speaker. This means Soren led coalition has the support of 50 MLAs.

The rest -BJP-25, Nationalist Congress Party 1, Communist Party of India(ML) Independent 1 and vacant 1-are in no position to challenge the ruling coalition led by the CM Soren.