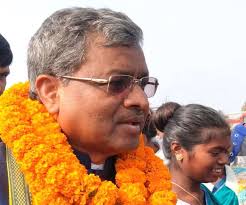 Two major changes are set to determine the fate of BJP in Jharkhand. Both are connected with Ghar Wapsi(Home Coming) of ex-CM Babulal Marandi

First is the entry of Marandi into BJP.In fact, he is the first CM of the state, who had quit it in 2003 only to oppose BJP and founded a political party-Jharkhand Vikas Morcha. During the past 17 years, JVM had put up candidates of MLAs and MPs against BJP and won Assembly seats in a single digit.

Now, Marandi is shifting gear. He is going to join the BJP in presence of the party President J.P.Nadda any day after February 10.'" After the Delhi election results come out on February 8, a grand public meeting will be held to welcome Marandi in presence of Nadda. Even Home Minister Amit Shah can be present", said a BJP leader who was aware of its plan.

Alongside, Marandi has directed JVM leaders to set up new committees at district and block levels within ten days so that a large number of his party men can attend the merger of JVM with BJP.

Incidentally, in 81-member Jharkhand Assembly, JVM had three MLAs-Marandi himself, Pradeep Yadav and Bandhu Tirkey. Both Yadav and Tirkey who were out of jail on bail had deserted him and sought to join the Congress.

In the absence of these MLAs, Marandi and his supporters and followers can be expected to join BJP. After the rout of the BJP led by ex-CM Raghubar Das, in the Assembly polls 2019, the party badly lacked leaders. So much so that its high command was not able to nominate any of its leaders as the leader of the opposition in the Assembly.

Two, against this backdrop, with Ghar Wapsi of Marandi, the BJP can appoint him as leader of the opposition in Jharkhand. This can strengthen BJP. However, the question is whether BJP's non-tribal and tribal leaders including Union Minister Arjun Munda will greet Marandi and cooperate with him remains to be watched.