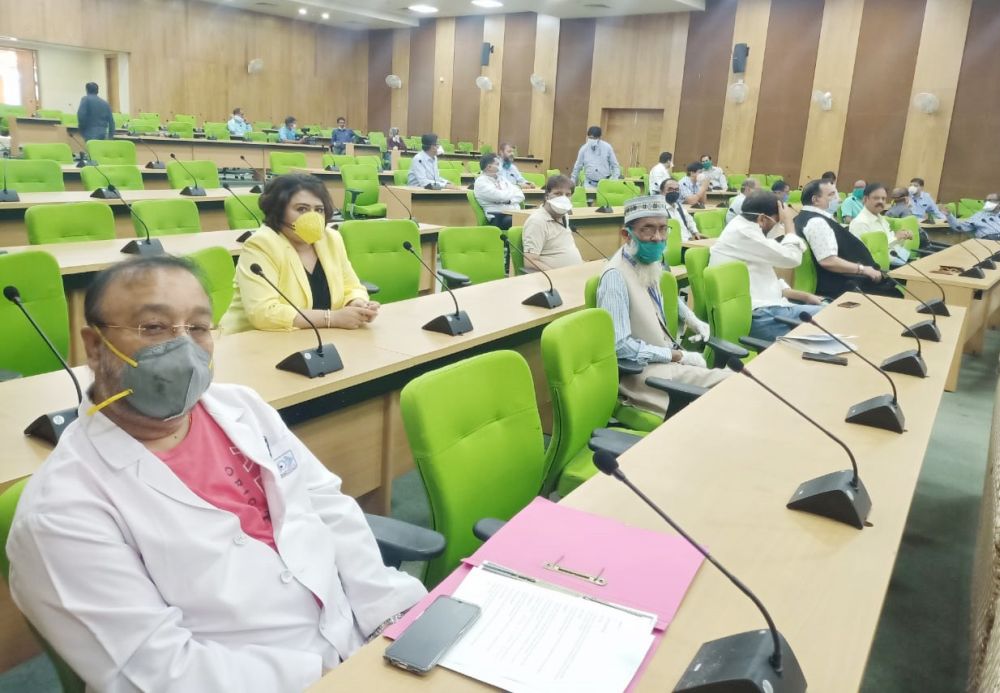 *Picture shows doctors attending the meeting on COVID-19 issue called by the state health department in Ranchi on April 8, 2020.

Every time 45-year old Parvez Ahmad coughs in his home, his parents look the other way. Ahmad is among scores of men and women in Soren land-Jharkhand-who had a link to the Tablighi Jamat Markaz held in New Delhi's Nizamuddin area last month.

The Rural Development Minister Alamgir Alam and a man of his constituency- Pakur -Azim Sheikh prevailed upon Deputy Commissioner Rai Mahimapat Ray to provide transportation - 11 buses- and enabled them to move from Ranchi to Pakur, Sahebgunj, Koderma and other districts on March 29 when the Union government had directed district administration across the country to seal the boundaries of districts.

None of them were tested to underline whether they were COVID-19 plus or negative. Today, nobody knows whether or not  they were silently spreading the Chinese virus in their families."We have ordered the enquiry", ex-Chief Secretary D.K. Tiwari is on record having said.

On paper, the transportation of people during the ongoing lockdown was prohibited. But Ranchi DC's decision to allow them to move by 11 buses to their own homes without getting each one of them checked and tested of Coronavirus goes against the spirit of the transport ban and enveloped danger prevalent in the constituency of Alamgir Alam.

Apparently, this inconsistency is but a living example of the state government's lopsided policy with regard to its failure to address COVID-19 issue in Jharkhand.

That is not all. Unlike other states such as New Delhi, UP, Bihar and Odisha where Chief Ministers- Arvind Kejriwal, Yogi Aditya Nath, Nitish Kumar and Naveen Patnaik respectively -were leading their own constituted teams of top officials and doctors and fighting COVID -19 round the clock, Jharkhand CM Hemant Soren has not set up any team worth its name till date.

"Since the number of testing machines and centres were just two- one at MGM Hospital, Jamshedpur and second at RIMS Hospital, Ranchi, testing of all vulnerable persons falling in suspected six digits was not possible. So  the need of the hour is to increase the number of testing centres and deploy private young doctors and trained technicians there."

Prof(Dr)D.P. Singh, Director, RIMS, who is leaving no stone unturned to medically fight the Chinese virus, wants the state government to set up 'Bio-Safety' Chamber.

Another veteran surgeon Dr R.P. Srivastava says that the state of tribal Jharkhand does not need "a leap service team" to deal with the mounting danger posed by the Chinese virus."There must be a dynamic team and dynamic plan of action regulated on a daily basis", he said.

More, Dr Bharti Kashyap and Dr B.P. Kashyap, two eminent ophthalmologists and office bearers of Indian Medical Association think that in the prevalent state of affairs, " there is an urgent need to create a Task Force rather than give birth to an Advisory Committee on files."

Both Dr Kashyap's who had attended a meeting convened and chaired by CM Soren in Ranchi on April 8, had advised that "All Hospitals where emergency work is continuing should be marked as Hot Spots. This simply because doctors, nurses and medical staff working there are potentially vulnerable".

All the staff of hospitals including sweepers and plumbers, guards, accountants and reception personnel, security guards, apart from Doctors and Para-medicals, should be tested by a rapid antibody test. It is affordable", said Dr Bharti.

Aayushman Bharat may be incorporated with this disease, investigation and treatment, suggests Dr Bharti.