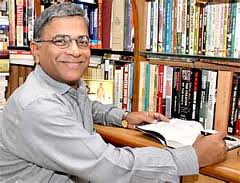 Two books — Sapne Aur Yatharth and Samay Aur Sawal -by Chief Editor of Prabhat Khabar,Harivansh, released on April 15,has raised a question on the performance of  this state viz a viz the dreams and aspirations of its people.

In fact,both these books are colection of articles written by him for his newspaper over the years.Both these books are worth reading mainly because they reflect upon some problems this state were confronting for long.”Readers will be able to judge the merit and demerit of my write ups.But whatever I have written were based on facts and my perception”,Harivansh told the jharkhandstatenews.com.

On the day of the release of the book,chief minister Aarjun Munda had said;”We read his thought provoking articles and often forget them immediately. These articles in the form of a book will constantly remind us about challenges that we need to take-up.”

“Harivanshji should think of writing his third book under the title Ajab aur Gazab,” Balbir Dutt, noted editor, said referring to the political class and mandarins of the State in his opening remark. The recent story of a section of unscrupulous currency hunger political class bringing shame to Jharkhand in the Rajya Sabha election dominated debate over the books.

Formed 12 years back, the State witnessed eight Chief Ministers, eight Governors presided as the custodian of the right of the tribal and eight Chief Justices so far served in Jharkhand. “Is the number eight a mere coincidence or does it have some connection with numerology,” Dutt remarked.

Joining the debate Marandi accepted that the political system in Jharkhand had gone haywire. “We are moving in the wrong direction. We have forgotten the basic fundamentals of democracy,” Marandi said and supported direct election of Prime Minister and Chief Ministers. “Jharkhand is a baby State and problems here are more apparent”.

Speakers expressed their grave concern over money replacing morality in politics whose most brazen demonstration was offered during the Rajya Sabha election in Jharkhand. The political classes got no concession or benefit of doubts in the chapters of the book.

There are many a tough and painful problems waiting for an answer from the political class.

Munda remarked: “Jharkhand has been facing its own sets of problem from the time of its formation.”

‘Unprecedented fall in the political morality,’ and ‘money ruling politics’ Munda said that the issue needed to be debated in a larger prospect. He referred to a case from the history of Britain quoting an instance of a parliamentarian who sold his seat to another for a certain amount of money without even completing his tenure. “Britain brought reform after that without disturbing the templates of the constitution. We need a reform here”, Munda said.

Speaker CP Singh suggested that the body of politics in Jharkhand needed a major surgery in the wake of Election Commission countermanding March 30 RS election in Jharkhand due to alleged misuse of money. “The Central Bureau of Investigation should investigate all such Rajya Sabha elections in Jharkhand right from 2000,” he said. Singh rather recommended stringent law to make legislators responsible towards peopl