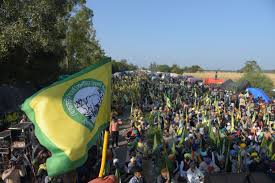 What are all these acts? Nobody can predict its outcome.But all these appear to have dangerous implications of Hybrid Warfare that many citizens of India and journalists of the world know little of.

Clearly,underneath the main plot of Kisan Andolan is the ominously lurking sub-plot of what is called as Hybrid Warfare.It is being waged by Pakistanis and Khalistanis,events have revealed.The contours of the same are becoming increasingly distinct and dangerous.

Most Indians are still not fairly familiar with the concept of the unconventional Hybrid Warfare . As a result they are not able to fully appreciate its full implications for the security and sovereignty of India and in the process end up being indifferent to it.

For a coherent and comprehensive understanding of the running theme in the apparently disjointed acts which include what Mr. Modi means by using the acronym FDI(Foreign Destructive Ideology),climate activist Greta Thunberg's use of Toolkits, pop-star Rihanna's unexpected 'singing' in favour of the Andolan and American Super Bowl football commercial , or for that reason Punjab's Chief Minister Amarinder Singh's assertion that there has been increase in his state of the clandestine supply of arms and drugs by Pakistan in the wake of the Andolan, we need to also look from the perspective of much important hybrid warfare that is being waged by the Pakistanis and Khalistanis individually and collusively against India.

The present on-going protracted Kisan Andolan against the new farm laws enacted by the Central Government even if arguably is an apolitical agitation as claimed by its organisers and leaders despite their flirtations with the opposition leaders on the edges still provides a fertile ground for the Pakistanis and Khalistanis to further their own respective interests detrimental to the territorial integrity and sovereignty of India.

For example,on 26th January which was India's Republic Day, country hung its head in shame when,inter alia, the Khalistani elements in the agitating crowd related to the Andolan, managed to break through the Security forces and unfurl alleged but denied Khalistani flag at the ramparts of Red Fort located in Delhi. The latter has over the years become a symbol of Indian integrity and unity with the ceremonies related to Republic Day and Independence Day celebrated there.

Despite being thought of as a reprehensible act,the agitation at the Red Fort by the farmers and more importantly the otherwise weakened Khalistani elements in it, caught the attention of the national and international community. It would be germane here to recapitulate in brief the movement for Khalistan that started in Punjab but has important international dimension to it with the Punjabis as a community growing influential politically and financially in the developed countries like Canada, America, England and other European countries. Of course, it is generally believed that a large section of them do not subscribe to the idea of Khalistan but still there seems to be more than a fringe which is indulging in activities to turn Punjab into Khalistan.Being in developed countries, their activities also catch the attention of the international community.

Very often the local politicians in those outside countries due to the compulsions of the local electoral politics and the important role of the Punjabi community in that, end up making anti-India statement and in the present context in favour of Kisan Andolan.This is despite the fact that structural reforms that will get ushered in due to the Farm Laws will bring about greater freedom of choice to the farmers which is the leitmotif of Liberalism as a political philosophy with which the Western world is associated with ideologically and politically. Justin Trudeau, the prime minister of Canada, is a case in point who like a juvenile dilettante, due to the domestic political compulsions, waxed eloquent in favour of the present farmer's movement in Punjab.

Indeed although he looked like addressing India, actually he seemed to be addressing the local Khalistani elements and Punjab sympathisers more on whose votes his political survival rests.Khalistani movement is a fundamentalist movement aimed at seceding from India by carving out what broadly speaking at present constitutes Punjab.

The movement reached its zenith in 1970s and 1980s with the charismatic Jarnail Singh Bhindranwale , a fundamentalist, and his followers who were heavily armed took hold of the holy Golden Temple at Amritsar. We all know of the Operation Bluestar in June,1984, under General Kuldip Singh Brar to flush them out resulting in heavy casualties including those of army personnel and the subsequent assassination of the then prime minister Indira Gandhi by her Sikh bodyguards in retaliation.

Subsequently, Khalistani movement and the militancy associated with it were contained due to,inter alia,the concerted police crackdown on the militants mainly under the police head K. P. S. Gill. The movement had also not been able to garner widespread support of the common Punjabi populace. Though low, Khalistani movement has never been out. It has been partly dormant but not defunct.

The Khalistani movement has run its own rough course always ominously lurking on the side to enter the mainstream of Punjab polity and society as a whole at any opportune moment.No wonder, despite the leaders of the Kisan Andolan upping the ante in the face of what they perceive as the Central Government's intransigence in repealing the Farm Laws as demanded by them and their provocative utterings and actions, the Government has continued to act patiently trying to avoid any serious physical confrontation which may cause strong dissatisfaction among the populace.

This will provide a fertile ground for the Sikh militancy to make a re-entry riding on the crest of the "victimhood card' which comes so easily to the Indians. Certain sections of the influential Punjabi diaspora has aided and abetted the Khalistan movement in Punjab and has furthered its interest by colluding with Pakistan on the one hand and pressurising the overseas governments of their domicile to support their cause in some form or the other. Pakistan has been more than willing to support them . A situation as at present created by the Kisan Andolan is decidedly an opportune time for such forces.

This time one is also witnessing the way overseas Khalistani elements have been able to influence celebrities allegedly on occasions also through financial means. For instance, climate activist Greta Thunberg is believed to have used a toolkit which she deleted later, created by Poetic Justice Foundation espousing the Khalistani cause. Police has registered a case in the matter and the same is under investigation. Apparently, Greta allowed herself to be influenced without fully knowing the issue. As to what was the reason for her to do so may come under investigation.

Likewise, Rihanna who is a pop-star also tweeted in favour of the agitation. In certain quarters it is alleged that she was prompted and paid for the same though denied.Super Bowl which is associated with the very popular Football tournament in America watched on T.V.by more than a hundred million fans, ran a 30- second highly paid commercial on the present farmer's agitation. Some other celebrities have also joined in.

Such incidents even if prompted, motivated or ill-informed cause bad publicity for India and further the cause of the perpetrators. Technology makes it easier to air one's opinion well thought out or otherwise, without corresponding responsibility. At the same time India of to-day is sufficiently strong and self -assured not to fall victim to such outside stratagems.

No wonder PM Modi spoke of the FDI of another variant which he explained as Foreign Destructive Ideology.Almost all the illustrative efforts as narrated above fall within the framework of hybrid warfare trying to help Khalistani cause without directly engaging in a conventional warfare.