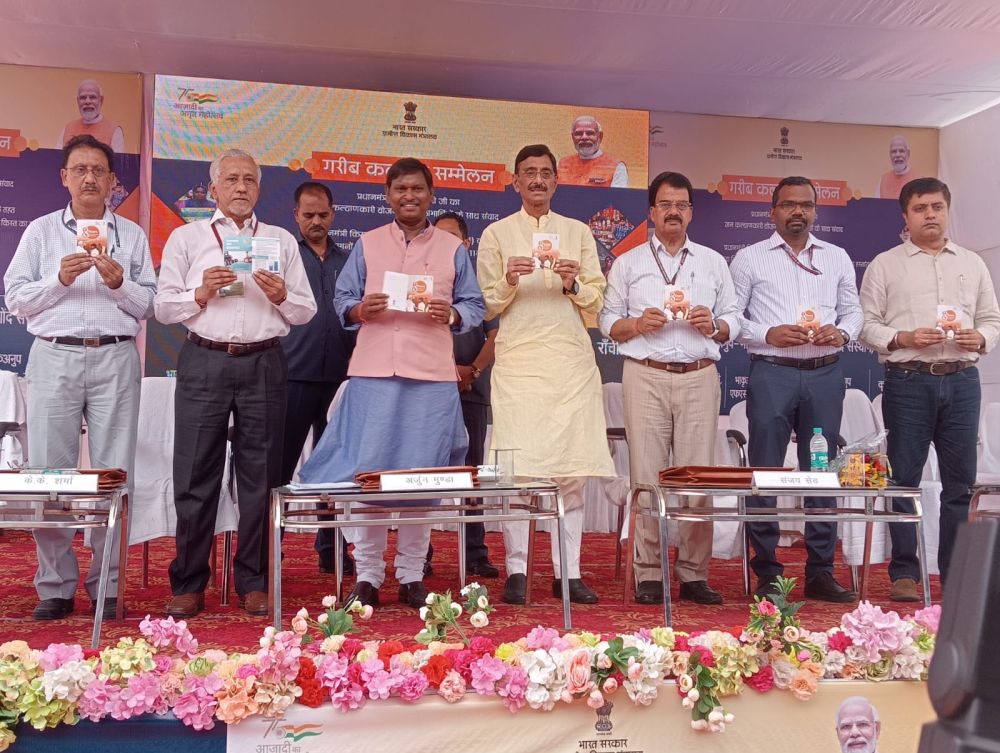 Far away from Shimla where Prime Minister Narendra Modi interacted with scores of beneficiaries of the government’s development schemes during the past 8 years of his tenure, lies Ranchi where Union Minister for Tribal Affairs Arjun Munda along with other dignitaries like MP, Ranchi, released a theme pocket booklet in Hindi and English at PM’s Garib Kalyan Sammelan.

The Sammelan and the booklet are part of the celebration of the Azadi Ka Amrit Mahotsav to commemorate the Indian Independence, a nationwide event of interaction with the beneficiaries of about sixteen schemes/Progammes spanning nine Ministries/Departments of the Government of India was organized on May 31, 2022.

The schemes/programmes covered under the booklet  are:

The principal objective of the interaction was to understand how these schemes have brought about ease of living for the citizens, to explore the possibility of convergence and saturation and to assess the citizens’ aspirations for India as it completes 100 years of independence in the year 2047.  The Sammelan is claimed to be one of the largest ever single-event nationwide interactions.

In Shimla, this national level Sammelan was presided over by the Prime Minister of India.  He interacted with beneficiaries about the impact that the wide-ranging schemes/programmes covering housing, availability of potable water, food, health and nutrition, livelihood and financial inclusion etc., have had on their lives. He also interacted with beneficiaries of ---- (number) of Districts through videoconferencing (wherever possible).

Similar Sammelan was also organized at almost all the state capitals, districts and KVK centres across the country.

At 11.00 A.M., the event was linked with the National event and the participants watched Prime Minister Narendra Modi live from Shimla interacting with the beneficiaries of the country. The participants took selfies with specially created selfie points.