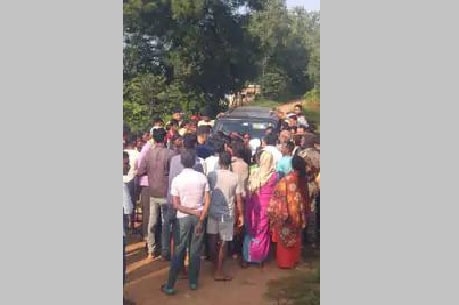 Yogendra Sao was kept under custody by the villagers for about four hours near Melani village under Hariharpur panchayat of Patratu block in Ramgarh district today.

Villagers have alleged that Yogendra Sao, former Congress MLA and Agriculture Minister in Jharkhand, who was staying in a resort in Patratu, had illegally encroached and acquired 2.42 acres of land belonging to them.

Now, when the boundary wall was being built by him, Yogendra Yadav was on his way to the site of the land in his four-wheeler vehicle. Noticing his arrival, villagers encircled his vehicle and kept him under their custody.

These villagers raised slogans against Yogendra Sao and his associate and another Congress MLA Amba Prasad whose claim to fame is that she had come to the Jharkhand Assembly premise by riding a horse on March 9, 2022.

They held Yogendra Sao hostage for nearly four hours and released him only after he agreed to stop the construction work of a boundary wall on the said land.

When questioned, Yogendra Sao, who was facing a number of criminal cases, replied that he had visited the village at the invitation of three villagers - Naresh Mahto, Ramesh Bedia, and Michel Tigga.” I have nothing to do with the controversial plot of land”, he said.

When information spread, the police Dy.SP Birendra Kumar Choudhary and Rohit Kumar reached the spot and allowed him to go to Patartu.