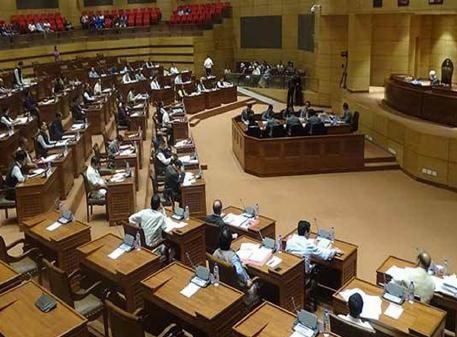 Following a protest by the opposition BJP, the second day of the winter session of the Jharkhand Assembly witnessed a ruckus. The Speaker adjourned the session till tomorrow - December 21.

Even before the second day of the winter session began, BJP MLAs were found sitting on dharna outside on several charges including rising crime- murder and ‘love jihad’.

“The Soren government is playing with the fate of unemployed youths of the state”, said Randhir Singh as his party colleagues yelled- “ Shame, Shame … the maker of fake employment policy.”

Today, a delegation of the ruling coalition parties - Congress, JMM and RJD- led by CM Hemant Soren is scheduled to meet Governor Ramesh Bais to make a plea to recommend the earlier Assembly-approved domicile policy draft linked with 1932 Khatiyan to the President of India to amend the Sixth Schedule of the Constitution.

The opposition BJP which described it as a “deliberately planned move to fool” the people have decided to keep themselves away from the ruling parties’ “ political move.”