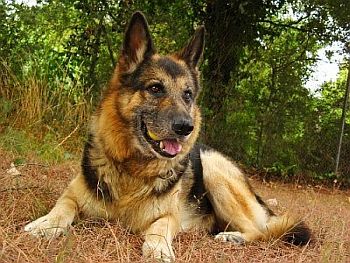 When policemen die confronting the criminals and the Maoists,they are recognized as martyrs.However,in absence of any memorial for them,they are cremated/buried in Jharkhand.

In sharp contrast in New York,a heroic dog of the Federal Bureau of Investigation is set to be honoured and memorialized after he was killed by gunman.

A byline story in TodayNews.Today.com by Scott Stump
says as follows:

K-9- a two-year-old Czech German Shepherd that gave his life in an effort to save a group of agents from a murderous gunman in upstate New York will be memorialized by the FBI for his bravery.

Ape, a two-year-old Czech German Shepherd, was shot and killed in the line of duty on Thursday while accompanying a group of FBI agents trying to subdue Kurt R. Myers, 64, in abandoned bar in Herkimer, N.Y. Myers allegedly shot and killed six people in the towns of Herkimer and Mohawk before holing up in the empty bar. Outfitted with a camera to allow agents to see inside the bar, Ape was the first to enter the location and was hit in the chest by a bullet from Myers. The team of FBI agents and state police then followed the dog inside, and shot and killed Myers.

“Ape was doing what he was trained to do and made the ultimate sacrifice for his team,’’ Special Agent Ann Todd said in a statement. “His actions were heroic and prevented his teammates from being seriously wounded or killed.’’

The dog was given CPR at the scene and rushed to nearby Herkimer Veterinary Associates, but could not be revived. The canine’s body will be returned to FBI headquarters in Quantico, Vir., and a memorial is being planned. His name will also be added to a memorial wall, according to Todd.

This was just the dog’s second mission with the FBI since starting with the agency on Feb. 25 and completing a four-month tactical training course, according to The Associated Press.

“He will be missed by his FBI family,’’ Todd said in her statement.