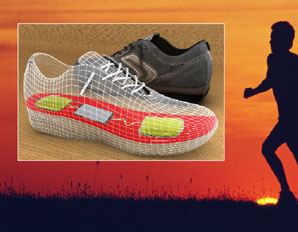 In an article published in Span(August,2012),Terry Devitt writes:If the vision of Tom Krupenkin and J. Ashley Taylor comes to fruition, one day soon,your cell phone—or just about any other portable electronic device—could be powered by simply taking a walk.In a paper that appeared in the journal Nature in 2011, Krupenkin and Taylor, both engineering researchers at the University of Wisconsin-Madison, describe a new energy-harvesting technology that promises to dramatically reduce our dependence on batteries and instead capture the energy of human motion to power portable electronics.

“Humans, generally speaking, are very powerful energy-producing machines,” explains Krupenkin, a UW-Madison associate professor of mechanical engineering. “While sprinting, a person can produce as much as a kilowatt of power.”

Grabbing even a small fraction of that energy, Krupenkin points out, is enough to power a host of mobile electronic devices—everything from laptop computers and cell phones to flashlights. “What has been lacking is a mechanical-to-electrical energy conversion technology that would work well for this type of application,” he says.