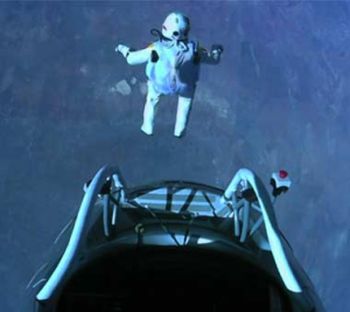 Adventure has its own meaning.

This was redefined by Austrian Felix Baumgartner when she become the first skydiver to go faster than the speed of sound, reaching a maximum velocity of 833.9mph (1,342km/h).This was on October 14,2012.

Now,another woman from the US Carolyn Meiselbach, disobeyed her doctors’ orders to skydive 13,500 feet out of an airplane in New York.

“Meiselbach, who jumped along with a 60-year-old instructor on April 24 at Skydive Ranch in Gardiner, NY, suffered only a chest bruise caused due to rubbing of the harness of the parachute against her pacemaker.The thrill loving Meiselbach is also planning to go back and jump with 10 friends for her 80th birthday in October”,said the report.