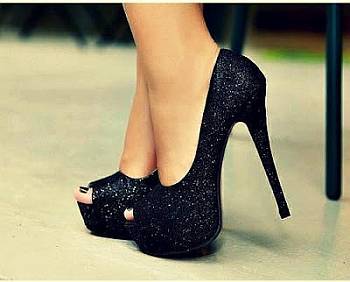 The story of a 24 year old supermarket attendant who escaped with injuries after getting stuck in the gap while alighting at Rabale station before the train pulled to a stop in Mumbai recently has underlined the pros and cons of high heel shoes.She says that her heels may have caused the fall.

An article in articlesonhistory.com that states that high heel shoes is a symbol of Class, Gender and Sexuality gives its history as follows:

High heel shoes are defined as footwear having a heel that is higher than the toe. Throughout their history, they have acted as symbols for differentiating between the sexes and the social classes. What’s more, right up to contemporary versions, they are considered symbols of sexuality and fertility.They give off a contradictory image as they make a woman appear that her movement will be easier and more elegant as she seems to be already half walking in the standing position. However in reality, high heel shoes shorten the step and make walking slower and less steady. While today’s version is, it is worn for fashion purposes only, precursors to the high heel did have functional value, however that did not necessarily stop them being indicators of social status.

In ancient Egypt, wearing shoes may have served to set apart lower classes from the nobility as normal people walked around barefoot while the rich usually wore flat, leather shoes. What’s more, murals from around 3500 BC depict members of the aristocracy wearing shoes that are strikingly similar to high heels. The shoes were worn by both men and women and were probably mostly used for ceremonial purposes. In a more practical application, shoes with extended heels were also worn by Egyptian butchers who wished to keep their feet out of reach of the blood of the animals they slaughtered.

In ancient Greece and Rome, actors often wore a shoe known as the Kothorni that had high wooden or cork soles. The heights would vary so that the higher the soles, the higher the social status of the character being played. It was probably during the Roman period that high heel shoes first became a part of what we now call women’s history and raised gender issues when they became synonymous with the sex trade. Prostitution was legal in ancient Rome and women started wearing shoes with a heel as a way of identifying their profession to potential clients.

During the medieval period, the high heel would be mainly used for practical reasons. Both men and women wore wooden shoes and in a bid to keep the expensive and fragile footwear out of the muddy streets and protect them from the uneven surfaces, people would walk on heels known as Pattens that were attached to the shoe.

The Chopine, Feminism and Class distinction

The Chopine or platform shoe was invented in Turkey in the early 15th century and was popular across Europe for the next 200 years. Chopines were worn only by women and marked a turning point in women’s history of fashion as they had very little practical use but were just deemed to be stylish and attractive. In some cases, the heel would be up to 30 inches high meaning the wearer had to use a cane or have help from a servant to walk.

The Chopine became a status symbol for high class women in Europe and could be adorned with gold laces, embroidery and decorative leather work. According to costume historian Kevin Jones of theFashion Institute of Design & Merchandising in Los Angeles, ladies purchasing them had an extensive say in the appearance of the shoe and would tell the cobbler what materials to use and how high the heel should be.

Despite the choice and individualism it gave women, it is believed by many that the Chopine saw the start of footwear becoming a women’s rights issue. It is thought that the practice of wearing shoes that were increasingly difficult to walk in was encouraged by husbands who believed the cumbersome movement would inhibit the chances of wives having illicit liaisons with other men.

The Rise of the Modern High Heel

During the early 16th century, the high heel as we know it today came into being though it was largely worn by both men and women. It is believed the shoe came into existence by accident and developed as a result of repeated repair work on the heels of shoes that would eventually elevate them and build up into high heels.

Throughout the 1500s, a more practical application saw the popularity of the heel grow. Both men and women wore riding boots with heels, usually around 1 inch high, that helped prevent them from slipping from the stirrups. However even this usage soon took on a more fashionable element and it became popular to have higher and thinner heels on riding boots, especially amongst the higher classes.

During the European Renascence, high heel shoes were a fashionable status symbol worn by both men and women from the privileged classes. It is believed that the idea of wearing shoes with high heels as a fashion statement was started by Catherine de Medici (1519 – 1589), who wanted to impress the French court when she wed the Duke of Orleans, the future king. In a bid to boost her short stature and add appeal to her plain looks, she donned shoes with 2 inch heels and the idea took off. By the second half of the 16th century, wearing high heels was so synonymous with the aristocracy that a person of class was said to be “well heeled”.

In France in the early 18th century, King Louis XIV made it illegal for anyone who was not from the noble classes to wear red high heel shoes and nobody could wear them higher than his 5 inch heels. Over the next couple of centuries, the heel became longer and more slender and the idea of the eroticism of the foot and footwear grew with it through art, fashion and literature.

As the heel in France was a status symbol of the higher classes, Napoleon had them banned in the aftermath of the French Revolution. From the 1790s, heels were considerably reduced and replaced by a slight wedge or spring heel.

Sexuality and the High Heel

In many parts of Europe there was more and more emphasis put on boosting the heel to add a more refined and sexually desirable effect on the foot, leg, body and posture of the wearer. However in the New World, this sexualisation of footwear was not seen in such a positive light. Attitudes to women’s fashion would gradually improve in the States, but it was not until the mid-19th century that they caught up with Europe in really allowing women to embrace shoe fashion.

From the middle of the 19th century, high heels grew in popularity and became more and more widespread as a fashion accessory. The invention of the sewing machine made it possible to make a much greater variety of heeled shoes which also added to the appeal as those that could afford luxury items wanted to stand out from those who could not.

To the Victorian, the instep arch was symbolic of a curvy woman and heels also make feet appear smaller and daintier. This increased the attraction for many women as big feet were considered an affliction, associated with old spinsters and a lack of femininity.

Heels now often came as high as 5 or 6 inches and were advertised as being good for the health as they made walking less tiring and were also seen as a good cure for backache. However the sexual connotations of the footwear did not go unnoticed in European countries and some campaigners from the religious communities still wanted them banned as they were believed to be a device women could use to bewitch a man into loving her.

The High Heel in the 20th Century

Perhaps influenced by the suffrage movements and concerns for women’s rights, shoe fashion at the turn of the 20th century generally became more sensible and shoes became flatter as a result of a demand for more comfortable footwear. After a revival in the roaring 1920s, the high heel again dipped in popularity during the years of economic crises in the 1930s and the war and post-war years of the 1940s, when luxury items were in short supply.

However from the 1950s, through the influence of emerging fashion designers such as Christian Dior, the fashion world came into its own and took off as an industry. More and more shoe designs began to appear in the shops and with Hollywood actresses and role models like Marilyn Monroe modelling high heels both on and off the film set, their popularity soared.

The high heel shoe now became an integral part of the wardrobe of most women from the West, regardless of their social status, however the footwear soon became a controversial issues on the subject of women’s rights. In the 1960s, feminist groups began to criticise the high heel shoe, seeing it as a device invented by men that slowed the progress of women, both figuratively and literally.

Despite this, the shoe continued to evolve and by the 1980s, the traditional feminist view of the high heel had begun to wane. Proponents of women’s suffrage now believed the sexual connotations of the shoe could offer pleasure to women as well as men and that fashion in general allows experimentation with appearances that can challenge cultural norms on the issues of class and gender separation. The new feminist thinking believed that the heels gave the wearer a sense of height, power and authority and that women were wearing them for themselves, not just for the admiring gentlemen.