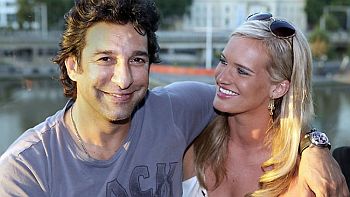 All speculations and gossips over his ‘affair’ with Sushmita Sen have been grounded with Wasim Akram gearing up to marry Australian Shaniera Thompson.

Reports say Akram,47,whose wife Huma died in 2009,leaving him with two kids,and Shaniera knew each other for over an year.She has reportedly agreed to convert from Christianity to Islam and stay with Akram in Pakistan.

While Thompson is a former public relations consultant in Australia,Akram,who was suffering from diabetes,had played 104 Tests and 356 one-day internationals for Pakistan in a career lasting from 1984 to 2003.