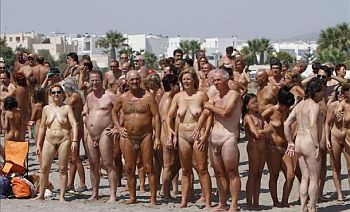 Reports claim,729 people in all bathed nude at the same time in the beach at the southeastern Spanish town of Vera on Sunday.

Later it proclaimed itself as holder of the new Guinness world record for mass nude bathing.

In the past,in nude bathing,New Zealand was recorded to be number one with 506 nude bathers. “By setting the new record, Vera is intending to promote its tourist potential and set itself up as an international naturism, or nudity center, according to town mayoral adviser Juan de la Cruz”,said a IANS’ report.