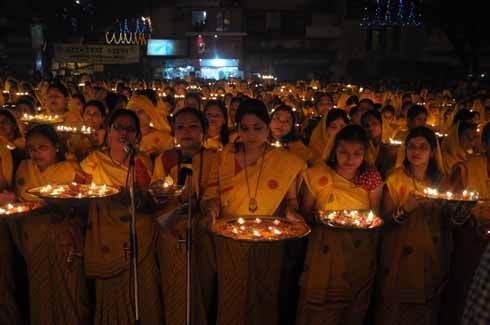 This year, however, things have taken a sharp turn. Big Kali Pujas were performed with veering ‘themes’ and pouring in money in lakhs to draw eyeballs. No body can question where from  Puja funds are coming?

Traffic near the Upper Bazar and Lalpur Chowk was a literal crawl on Friday-Saturday,thanks to the massive pandal bang opposite these areas in Ranchi.In its 39th year, the puja has become a huge hit.

The pandal resembles a palace, complete with several chandeliers and five massive idols – all different versions of Goddess Kali. But the biggest draw is the skeleton that does breaks into jig as the crowd cheers.

Earlier, it was known as councillor Ranmat banerjee’s puja but today another Trinamool leader from the locality,Pankaj Banerjee , has taken it over. ”

Picture shows devotees holding earthen lamps as they take part in a Maha arti at a Goddess Maa Kali Puja Pandal at Harmu in Ranchi on Friday.