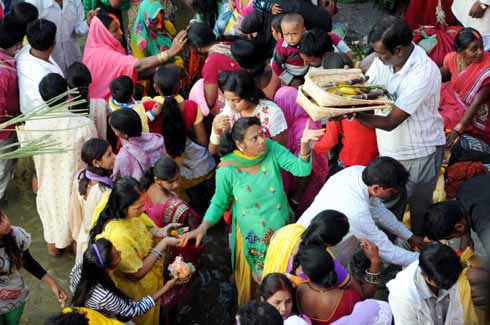 The festival  has its own history.

Wikipedia says:” It is believed that the ritual of Chhath puja may even predate the ancient Vedas texts, as the Rigveda contains hymns worshiping the Sun god and describes similar rituals. The rituals also find reference in the Sanskrit epic poem Mahābhārata in which Draupadi is depicted as observing similar rites.

In the poem, Draupadi and the Pandavas, rulers of Indraprastha(modern Delhi), performed the Chhath ritual on the advice of noble sage Dhaumya. Through her worship of the Sun God, Draupadi was not only able to solve her immediate problems, but also helped the Pandavas later regain their lost kingdom.

Its yogic/scientific history dates back to the Vedic times. The rishis of yore used this method to remain without any external intake of food as they were able to obtain energy directly from the sun’s rays. This was done through the Chhath method.”

Further,Wikipedia mentions that the Goddess that is worshipped during the famous Chhath Puja is known as Chhathi Maiya. “Chhathi Maiya is known as Usha in the Vedas. She is believed to be the consort of Surya, the sun god. Some scholars are of the view that she is only the beloved of Surya and some suggest that she is Surya’s wife”,says Wikipedia.

It adds that “Usha is the term used to refer to dawn – The first light of day. But in the Rig Veda she has more symbolic meaning. Symbolically Usha is the dawn of divine consciousness in the individual aspirant. It is said – Usha and Pratyusha, wives of Sun are the main source of Sun. Both Usha and Pratyusha are worshiped along with Sun in chhath parva. Usha (literally-the first morning sun-ray) is worshipped on the last day and Pratyusha(the last sun-ray of day) is worshipped in the evening by offering water or milk to the rising and setting sun respectively.”

“During the Chhath Puja, Chhathi Maiya is invoked to bless us with this divine consciousness which will help us to overcome all the troubles in the world – this bless will help us to Moksha or liberation.”