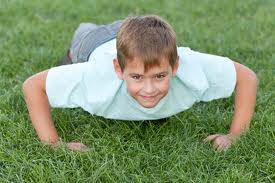 It is a story about a seven year old boy Andriy Kostash.Judges representing the Ukranian Book of Records saw he does not do magic or cheat any body.

An ABS News.a TV channel has reported that Andriy “pumped his arms after completing the challenge which took him,2 hours and 29 minutes.”

“I just like receiving prizes. Different one,” the same channel has quoted the 7-year-old as saying.

A report reaching here said:”The boy also revealed that he spent two years training for the event and once had finished more than 6,000 push-ups in a row.”