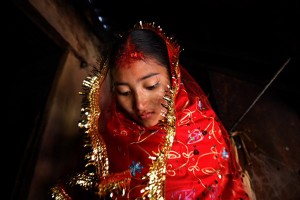 Sulochini,12,goes to a fair and meets her boyfriend Ashok,14.Soon they marry with the consent of their parents,a feature common to many Adivasi cultures in India and Nepal.

The law in these countries describes it as a “harmful traditional practice of child marriage.”But even Hindu families believe blessings will come upon them if marry off their girls before their first menstruation.

“Mad”,”crazy”,”Idiot”.Call them anything,but they have their own point of view.According to them,many problems related with sex such as eve teasing,molestation and rape can be contained provided the society reverts back to the practice of child marriage.

For instance,Dinkar Manjhi,an Adivasi,who himself got married at the age of 12,was reacting to the fact that highest number of teens got pregnant in the “least liberal” countries.He was referring to the latest story saying that any body who advocates prudery should be required to stand in a group of pregnant teenagers and explain why it is that.

“In countries such as Denmark or the Netherlands, most of them would not be pregnant,” the Sun quoted the British Naturist Society as saying in a paper submitted to the Scottish Government.”There is strong evidence that conventional attitudes towards the human body contribute significantly to a wide range of problems, some of them serious – but there is incredible reluctance to face the implications.”

“The comments were made in a seven-page document lodged with the Scottish Government,which this month closed consultation on proposals to improve the lives of children”,said the report quoting the Sun.

Majhi who is armed with the Westminster Government figures published recently,argued that the UK has the worst teenage pregnancy figures of any country in Europe, while the figures are even worse in Scotland…This pattern of less body tolerance, worse outcomes is repeated across the Western world. Our research shows conclusively that this is no chance connection,” Manjhi quoted Andrew Welch, commercial manager of the British Naturist Society,as saying.

Manjhi is of the view that sex is a biological need of a human being.Though he or she developed this need at 13-16 years,they failed to meet it since the marriage was solemnized much later.”This caused a number of problems such as repression of sex,hide and seek sex,molestation and rape.Even teenage pregnancy was the out come of this repression”,he,who is a sociologist,argued.