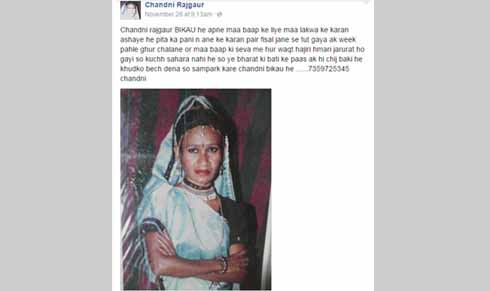 Reacting to Chandni Rajgaur’s plight,Jharkhand Chief Minister Hemant Soren has declared that he will adopt her. He said he will meet her requirement and get Rakhi put by her in his hand as sister.

This announcement was made by Soren at a time when the Assembly poll is in progress in Jharkhand. Already one round of poll was over and the second and the rest four rounds are slated to be held in December. ”This will help JMM use Chandni to expose Gujarat led by BJP’s leaders including prime minister Narendra Modi”,  says Alku Munda, a JMM worker.

In fact, down with poverty Chandni Rajgaur from Vadodara had taken a drastic step on social media to get over her suffering. She took to her Facebook profile and tried to sell herself online.

“The woman seeked help through her body to get over poverty. With old ailing parents and she was left helpless. So she took to the social media and tried to sell her dignity online. Her mother has been paralyzed and her father is bedridden after suffering from an accident. With no one to seek help and no means to provide for the family she took the dire step to sell her dignity.

She posted a picture with her contact number-7359725345-and said that while her mother was suffering from ‘Lakwa’ and father suffered from injury in his leg and said that since she lacked money to look after them, she decided to sale herself.

A report said: ”Although even after taking this drastic step, she confessed that most of the people who contacted her tried not to help her but rather approached to exploit her. Not much is known about Chandni but her Facebook profile says that she studied at M.S University and works for the Bharatiya Janata Party.”

But politician like Soren sounds keen to adopt her and look after her.