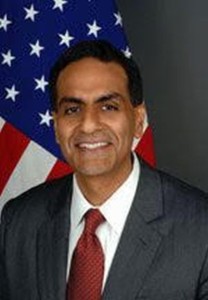 The U.S. Mission to India announces the arrival of Ambassador Richard Verma on January 2, 2015 in New Delhi. He will continue the U.S. Mission’s work in advancing the U.S.-India strategic partnership.

Upon arrival, Ambassador Verma said, “I am honored to serve as U.S. Ambassador to India at such an exciting time in our bilateral relationship. I look forward to meeting the Indian people and working together with the Indian government on our shared goals of security, development, and prosperity.”

Ambassador Verma is a former Assistant Secretary of State for Legislative Affairs. From 2009-2011, he served as a principal advisor to Secretary Clinton. He led the State Department’s budget and policy efforts on Capitol Hill, handled more than 200 Senate confirmations, and managed several major congressional investigations. He was also the Administration’s lead negotiator with Congress on Iran sanctions and the ratification of the new START Treaty. He most recently served as a senior counselor at both Steptoe & Johnson and the Albright Stonebridge Group, where his practice focused on international law and global regulatory compliance.

Earlier in his career, Mr. Verma served in the Senate as the senior national security advisor to Senate Majority Leader Harry Reid. He also worked in the House of Representatives for Defense Appropriations Committee Chairman Jack Murtha. Formerly a country director for the National Democratic Institute for International Affairs in Eastern Europe, Mr. Verma was a senior National Security Fellow at the Center for American Progress, a member of the Council on Foreign Relations, and served on the boards of the Clinton Foundation, Human Rights First, and the National Democratic Institute.