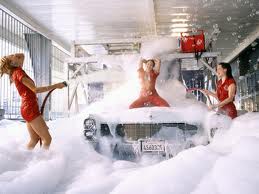 “Buy one get one free”.”Bumper offer:50 percent off.”These sale fundas are old.The latest is from Malaysia where customers were offered something they could not reject-free sex after nine car washes.

A car wash company had entered into a deal with a massage parlour.After the parlour was raided,the police found the car wash coupans with several customers of prostitues there.

Atleast five customers who had already got their cars washed nine times each,were about to have sex free from these prostitues,said a report quoting the Malaysia’s Officer in Charge Emmi Shah Fadhil.

The police learnt about the deal during the raid that was launched on a tip off.“To get the extra ‘offer’ customers must send their cars for washing nine times within a certain period.

The report further added:”Nine Vietnamese women, aged 18 to 28, were arrested on suspicion of prostitution. Four men suspected of running the scheme were also detained.”