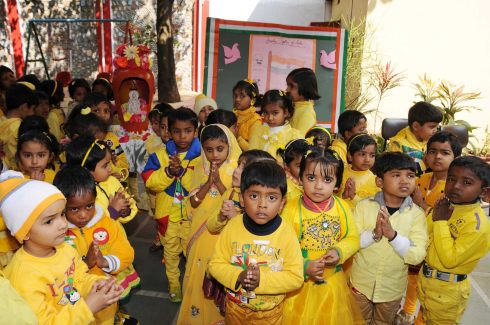 It was a day of cultural activity at Sherwood Public School in Ranchi.Apart from offering salute to Subhash Chandra Bose on his 119th birth anivarsary,its students parayed for Goddess Sarswati.

As per the schedule,Saraswati Puja is slated to be held on Saturday-Subnday.Today,students were busy to worship the Goddess Sarswati.

In fact,lakhs of people celebrate Goddesses Saraswati every year.The puja is to be celebrated tomorrow as Saraswati is the Hindu goddess of knowledge, music, arts, wisdom and learning.She is a part of the trinity of Saraswati,Lakshmi and Parvati. All the three forms help the trinity of Brahma, Vishnu and Shiva to create, maintain and regenerate-recycle the Universe respectively.
The earliest known mention of Saraswati as a goddess is in the Rigveda. She has remained significant as a goddess from the Vedic age through modern times of Hindu traditions.Some Hindus celebrate the festival of Vasant Panchami (the fifth day of spring) in her honour,and mark the day by helping young children learn how to write alphabets on that day.The Goddess is also revered by believers of the Jain religion of west and central India,as well as some Buddhist sects.