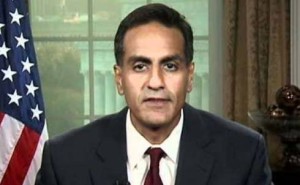 United States of America’s Ambassador to India Richard Verma today addressed a meeting in New Delhi.The meeting was held at the Vivekananda International Foundation in the national capital.

Verma talked about U.S. – India Relations: The Way Forward.His speech was as follows-

Let me start by thanking the Vivekananda International Foundation‎ and the Heritage Foundation for organizing today’s event. And in particular, a special thanks to the Director of Vivekananda General NC Vij and Lisa Curtis of Heritage.

Distinguished members of the audience, Friends, members of the media, it is my great honor to be here with you as the U.S. Ambassador to India at this historic time in our bilateral relationship. As President Obama said in his speech at Siri Fort last week, his visit, which I would call a transformative visit, reflected the “possibilities of a new moment” in our bilateral relationship. In his words, the United States and India are not just natural partners but we believe America can be India’s best partner. And that is what I am committed to working on over the next year. Over the course of their many warm and productive interactions during the visit the President and Prime Minister set forth a sweeping vision for a partnership that can lead the world toward greater peace, prosperity and security. As the President said to me before he departed India, now the hard work will truly begin as we seek to implement this ambitious agenda and take US-India relations to a new level of collaboration.

Today, I’d like to offer my view of the shared efforts that can move us from the possibilities of this moment to the progress that our leaders envision, with a focus on the security themes you will discuss today. As both of our media establishments have documented, the Prime Minister’s invitation and the President’s visit for Republic Day were truly historic. From up close, I was struck by the unprecedented amount of time our leaders spent together, and also by their camaraderie and shared belief that the U.S. – India relationship can be a powerful force in advancing the well-being of the peoples of our two countries, and the world. And what was apparent in all of these discussions was the recognition on both sides of an increasing convergence of interests between our two great nations, from trade and investment to security cooperation, to civil nuclear collaboration, clean energy, and climate change, and respect for religious diversity.

Though they joked with the media that they couldn’t share everything they discussed, we all had an excellent view of their growing rapport when the President sat down with Prime Minister Modi on the Mann ki Baat radio show. As the title suggests, they used this unique forum to speak from the heart about their approach to leadership and life.

I took a personal interest in the appreciation the Prime Minister expressed on Mann ki Baat for one of America’s founders, Benjamin Franklin. Ben Franklin was America’s first diplomat. But he was also an inventor, a journalist, and one of America’s most beloved commentators on everyday American life. Franklin also lived in Pennsylvania, which is where I was raised. My upbringing was a little different than Franklin’s; I recall my mother would walk me to school during Pennsylvania’s snowy winters while wearing her saris. But, like most Pennsylvanians, I was surrounded by reminders of Franklin’s wit and wisdom.

Among my favorites is Franklin’s well-known admonition that “energy and persistence conquer all things.” This is a phrase that defines where we are now. Our leaders have set the tone, but between summits – even an increased “periodicity of summits,” as the Delhi Declaration sets out — it is up to the rest of us to drive the relationship forward. By the rest of us, I mean me, Foreign Secretary Jaishankar, our teams at the MEA and the Embassy, our countries’ cabinets, our bureaucracies, and national security teams. And I mean strategic thinkers like you that help shape our policy development. We must all bring the energy and persistence necessary to overcome the obstacles and see the possibilities before us as we march toward progress on our shared objectives.

We’ve already had some great examples of this energy and persistence. For instance, on civil nuclear cooperation, through multiple meetings and determined effort, we were able to find common ground and reach understandings to overcome longstanding obstacles to increased commercial engagement in this important area. These advances will provide a foundation to move forward and fulfill the vision of U.S.-built reactors contributing to India’s energy security and promoting Prime Minister Modi’s goal of moving away from carbon based energy sources and delivering electricity to the hundreds of millions of Indians who lack reliable access to it.

To ensure we continue to bring this kind of focus to the overall relationship, I personally will lead multiple working groups for the U.S. Government on Implementation. I had an excellent meeting with the Prime Minister this morning and appreciate his commitment to implementation, and I look forward to meeting with the Foreign Secretary this afternoon. Bottom line is that both of our governments are full steam ahead toward achieving the objectives Prime Minister Modi and President Obama set out for us.

Today I’d like to focus my remarks on the specific themes of today’s conference: Asia, Defense, Counterterrorism, and Afghanistan.

First, East Asia Security: Our cooperation on Asia stems from a U.S. recognition that, as home to more than two thirds of humanity and world GDP, many of the questions that will define the future of global peace and prosperity will be settled in Asia. The President and Prime Minister acknowledged this certainty by concluding a Joint Strategic Vision for the Asia Pacific and Indian Ocean Regions. This statement is recognition that India’s Act East policy and our rebalance to Asia are complementary approaches based in our shared democratic values and respect for the stability and prosperity that the rules-based international system has brought to the world. We recognize and applaud India for already setting a high standard for the region by turning to the Permanent Court of Arbitration to peacefully resolve its maritime boundary dispute with Bangladesh under the principles of the United Nations Convention on the Law of the Sea.

Strengthening regional architecture will also be instrumental to furthering our shared goals in East Asia. We therefore welcome India’s interest in joining the APEC (Asia Pacific Economic Cooperation) forum. We look forward to working with India to strengthen the East Asia Summit to promote regional dialogue on key political and security issues.

Shipping lanes and air routes are the veins and arteries that keep our economies alive. In recognition of this fact, our leaders also recognized that we can do much more to safeguard maritime security, ensure freedom of navigation and overflight throughout the region, and promote peace and prosperity in the Asia-Pacific and Indian Ocean region. Looking to the future, expanding our bilateral naval exercise MALABAR by regularizing the participation of Japan, and elevating our trilateral dialogue with Japan to the ministerial level, are lines of effort that can move us in this direction.

Second, cooperation in Defense: Perhaps the truest test of a friendship between countries is the degree to which their armed forces trust and collaborate with each other. Ties between the U.S. and Indian defense establishments took immense strides forwards during the President’s visit. Just a few years ago who could have imagined that the United States and India would have agreed to establish a joint working group on aircraft carrier technology. No example better illustrates the new course of our collaborative relationship than the decision by the U.S. and Indian defense establishments and private sectors to pursue co-development and coproduction of defense articles. This is the type of defense collaboration we have with our closest partners. The U.S. defense industry will now make Bangalore and Hyderabad important sources for cutting edge technology.

Third: Counterterrorism Cooperation. Recent events have reminded us that terrorism remains a persistent and evolving threat to all open societies. The conversations between our leaders sowed the seeds that have the potential to make the U.S.-India partnership the defining counterterrorism relationship for the region in the 21st Century. One focus can be expanding the sharing of terrorism-related information in areas where our interests converge. Although I do not want to downplay complex issues surrounding the sharing of sensitive information, our two countries should seek to expand information sharing in areas touching upon intelligence, law enforcement, and sanctions practice. In the time since 9/11, the United States and the international community have made significant progress in developing the use of sanctions as a tool for targeting terrorists and terrorist networks. While past efforts are important, there is untapped potential for the U.S. and India to work together on new counterterrorism designations, including in the UN. Working together in this area and others, we can help achieve our leaders’ vision of “deepening collaboration to combat the full spectrum of terrorist threats.”

Finally, President Obama and Prime Minister Modi spoke of our shared commitment to promote a secure, stable, and prosperous Afghanistan. Although the U.S. combat mission ended in December 2014, we will continue to support the Afghan government as it pursues a future of peace, greater prosperity, and an end to conflict. Acting under Resolute Support Mission, U.S. forces in Afghanistan will have two primary missions in the coming years: working with NATO counterparts to train, advise, and assist Afghan National Security Forces, and maintaining a counterterrorism capability.

We recognize India is a key partner in Afghanistan’s future, and we look forward to continuing to discuss and engage with India during upcoming high-level consultations on Afghanistan.

These are just a few examples of our robust engagement. To keep to the focus of this conference, I haven’t even touched upon our cooperation in other important areas such as energy, climate change, global health security, and skills development. We can reserve that discussion for another time or during the Qs and As. Again, I’d just like to repeat that we believe strongly that America can be India’s best partner. With a firm purpose and resolve, and the widespread support of both of our nations’ peoples, I look forward to working with you all as we move forward together from possibilities to progress.