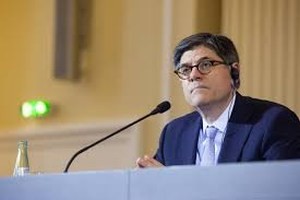 Later,they addressed a joint press conference in New Delhi.In his statement,Lew said that the Obama administration has deepend the bonds between the United States and India on a priority basis.The President had reaffirmed that commitment when he visited India last month, the first time a U.S. President had come to India twice while in office. “We are partners in many different ways – in our economies, as democracies, and as diverse societies looking to grow”,said Lew.

During the last few years, “we have seen significant progress. For example, trade between our countries has reached nearly $100 billion a year”he said.

In India, the Modi government has taken steps to reduce fuel subsidies, allowing the government to continue reducing deficits while providing the fiscal space to make investments that will boost growth and raise employment,he said.

Further Lew said “In addition, the Modi government has made headway on reforms that will facilitate foreign investment in India’s infrastructure sector – thus helping India meet its significant infrastructure needs. Still additional reforms are necessary, and an increase in public investment combined with a more open investment climate and a deeper financial sector, would help attract private infrastructure investment.”