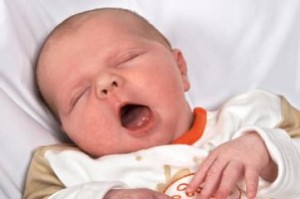 Like no body knows what caused matter and space in the universe,the cause of yawn,an involuntary action making your mouth open and your jaw drops,allowing as much air as possible to be taken in,remains unknown.

For,there is no conclusive theory on the reason behind the yawn.But the scientists know that when any body yawns,the air taken in fills his lungs.His abdominal muscles flex, and diaphragm is pushed down. The air he breathe in expands his lungs to capacity and then some of the air is blown back out.

It is involuntary action mainly because humans do it even before they were born.The research carried out by Robert Provine, a developmental neuroscientist at the University of Maryland, Baltimore County,has shown that 11-week-old fetuses yawn.

And while yawning is commonly associated with relaxation and drowsiness, the heart rate can rise as much as 30 percent during a yawn, and yawning is a sign of arousal, including sexual arousal,claimed scientists at the first International Conference on Yawning held recently in Paris.

The scientists in common have noted that yawn “can actually demonstrate a range of emotions, including interest, stress and even wanting to have sex.”

Yet much about yawning remains a mystery, despite the fact that the average person yawns 240,000 times in a lifetime. Scientists still don’t know exactly why we do it but – though it is certain that the favourite theory that claim that it provides extra oxygen to the brain is completely wrong.

Wolter Seuntjens, a Dutch academic who is a pioneer in chasmology (the science of yawn studies) was quoted as saying, “We can send a man to the Moon but we cannot explain this most trivial of acts.”