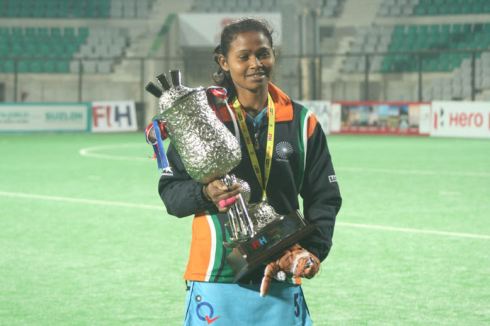 With an aim to promote the game of hockey,Hockey India has decided to award its top performing players every year.

The award will be named after a woman player from Simdega district in Jharkhand-Asunta Lakra.This is for the first time in the Indian history of hockey,Hockey India will provide award.

She is one of the six Indian girls who played their second Olympic Qualifier in London.Famous as a solid midfielder and tireless player,she was captain of India’s women hockey team.A backbone of the Indian team for over 8 years,her style and leadership are gifted.She played Jr. World Cup in 2005; Sr. World Cup and Commonwealth Games twice, and participated in the Asia Cup twice.

After taking retirement,Lakra is Vice President of Jharkhand Hockey Sangh.

The Hockey India will hand over Asunta Lakra award to selected Hockey players in New Delhi on March 28.