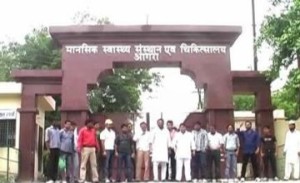 As hundreds of farmers have committed suicide due to losses incurred after unseasonal rains, the Agra Mental Hospital has opened a special cell to deal with traumatised farm owners and workers, many of whom are turning up at its OPD daily.

“The Agra Mental Hospital has opened a distress and suicide prevention help clinic. The number of patients in the OPD has suddenly gone up to 400 daily. Most of the new patients are farmers,” Medical superintendent, D.S. Rathod has informed the media.

Agriculture experts across Mathura and Agra have said that hailstorm in March and April are unprecedented, and the worst affected have been the wheat, potato and mustard crops.

The Uttar Pradesh government has released a list of 65 districts that have been hit by the freak weather, resulting in the death of over 400 farmers. While around 55 farmers have committed suicide, more than 350 have died of shock. Mathura’s additional district magistrate (Finance) Dheerendra Sachan has told the media that so far, they have disbursed around Rs.16 crore to 23,063 farmers.