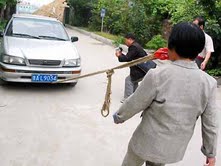 No joke,no magic.Mighty China’s son of the soil,7 –year old boy from its town of Chuzhou,has strength enough to pull a car,carry his father on his shoulder and ferry sacks of grain on his head.

Meet Yang Jinlong. His own weight is less than 55 kgs. But he has gained spotlight with the result that when he is at work,the people rush to see what he will do next.

This powerful minor boy became a star eversince he tied a rope around himself and pulled a van weighing 1.85 tons along a highway,leaving the audience yawn in sheer astonishment,a report by the Daily Mail said.

The report said:”He can carry his father, who weighs more than 90kg – almost double the little boy’s own weight- and carry a 40kg bag of wheat and a 100kg bag of cement.”