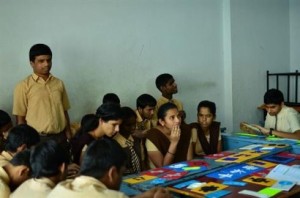 Visually impaired people are heavily constrained in their learning process as touch is the only medium through which they can learn.

Creating miniature objects to illustrate various concepts like light, sound is a prohibitively expensive proposition. But with the advent of 3D printing technology, this is going to change, says a press release.

think3D, a 3D printing company based out of Hyderabad has launched an initiative to digitize and 3D print all diagrams and educational images from school textbooks to help educate visually impaired students.

This project is done in collaboration with Devnar Foundation for the Blind, a school attended by more than 500 visually impaired or blind students.

With a desire to do something for the blind using 3D printing technology, think3D founders got in touch with Dr. Saibaba Goud, the leading opthamologist and co-founder of Devnar Foundation for the Blind.

“We explained him about 3D printing technology and how it can be used to create 3D s. He was interested in this concept and assigned a faculty member to brainstorm and come up with a concrete concept,” says Prudhvi Reddy, Co-founder think3D.

On being convinced that 3D printed parts can definitely help teachers to explain basic concepts to their visually impaired students, the think3D team spent about 45 days creating digital and 3D printed versions of various concepts from the physics textbooks, such as light rays that are small, durable and easy to handle.

These s were a huge success at the Devnar Foundation for the Blind, with students and teachers alike. One student said it was very helpful to begin to understand basic concepts. “This is a light ray hitting the lens and reflecting back. I can visualize which ray is coming from right which one from left, which one is parallel and which one is perpendicular. This helped me visualize it very well,” said the student from Devnar Foundation for Blind.

think3D has since decided to digitize and 3D print objects from other subjects as well.