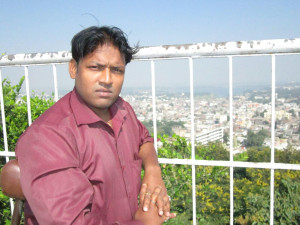 In a country where cricket is more than just a game and people worship cricketers, many young players dream of playing for India.

Jharkhand based Mukesh Kanchan’ s determination and desire to succeed helped him earn a place in the Indian cricket team for disabled.Now,he is all set to play against Lankan counterparts in a five day ODI series in India beginning from September 18.

“I am happy and feeling proud to be a part of the team”, said the 31- year old middle order player. Physical deformity failed to curtailed his passion for cricket. Kanchan has also scored considerable runs in their Asia Cup glory.

Speaking about his preparation for the tournament, Kanchan told www.jharkhandstatenews.com: “The team has been given extensive training and hopefully we are going to win the tournament and show that we are not less than any other cricketer. The team has got bunch of talented players”.

When asked about the coordination among the team members, he said “we are sportspersons and all of us help each other in overcoming the difficulty faced while playing and support each other in all possible ways”.

However, Kanchan has shared his disappointment with the management and government. He said “We face many financial difficulties. The state government announced that it will support us in some way but nothing has been heard from any body till date”. “We do not get sponsors easily. Moreover our match is not even telecasted live,” he added.

Despite his disability, Kanchan is optimistic and one can sense the spirit and eagerness to play. He further added that “we have special abilities and would exhibit them in the upcoming matches with Sri Lankan team”.

Kanchan appears to be a source of inspiration to several young talents who dream to be a part of the Indian cricket team. He motivated those young talents and said “Disability is never a hurdle. One should never lose hope and work hard to get a chance to represent the county”.